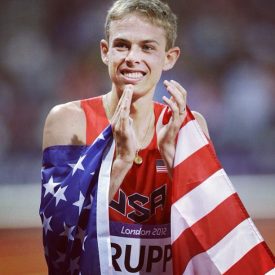 Rupp commented about his involvement in this year’s show: “I am delighted to return to Chicago to speak at the Run Show Chicago. I competed in the Chicago marathon four times, winning in 2017 and finishing 2nd last year. I have a strong connection to the city. I hope to share stories from my professional career, the journey I’ve been on to get to where I am today and hope to offer some advice and expertise to any aspiring long-distance runners who are entering training for the marathon. It will be so amazing to be in one place with thousands of others with the same interest – Chicago, let’s do this!”

The Show, the first in a series of three Run Show USA events, is set to bring the Chicago running community together for a day of unrivalled running inspirations and retail including incredible brands from Chicago retail giant Fleet Feet as well as Coros, Garmin, Asics, Xero Shoes, Altra and HOKA ONE ONE. The Show will provide a one-stop-shop, meeting every need a runner may have, from sneakers of all varieties to apparel, nutrition and hydration products, to recovery and cross training.

Visitors will have access to a host of features, giving runners of all abilities and disciplines direct access to experts and professionals across the board. Features include a Drug Free Pain Relief Zone, Strength Training Zone, Coach’s Corner, Events Village, Sports Movement Screening Clinic, Deka Fitness Zone and a Bra Fitting Bar.

Tickets cost just $15 for a weekend pass. Find out more about the event and register to attend at https://runshowusa.com/chicago/

View all Releases by RaccoonEvents