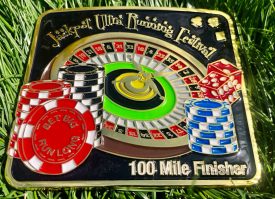 LAS VEGAS, NEVADA – November 18, 2022 /ENDURANCE SPORTSWIRE/ – In response to recent media reports and comments made by USATF officials suggesting the course run during the 2022 USATF 100 Mile Championship race hosted during the Jackpot Ultra Running Festival yielded less than 100 miles, Beyond Limits Running, the prior owner of Jackpot, is releasing the letter sent by from Ken Rubeli, Beyond Limits Running Co-Founder/Owner and prior Jackpot Co-Race Director, to the USATF Mountain, Ultra and Trail Committee Chairwoman Hobbs.

Mr. Rubeli stated, “Due to the significance of this issue, we felt it appropriate to be 100% transparent with the running community as recent reports omitted critical information. In addition to the letter below, it’s important to note we immediately followed advice from on-site USATF official to wheel measure the course following the incident described in the letter below. The course was wheeled several times with brand new wheel devices the evening of the incident described below. The measurements, which were shared in real time with Ms. Gentling, all yielding a course slightly over 100-miles. Knowing a Jones Wheel measurement is required, we hired the well-respected Nevada USATF course measurement official, who knows the venue and our course very well, to measure the course while markings were fresh. Knowing the importance of this measurement, I flew to Las Vegas on February 27, 2022 and observed the certifier calibrate his measuring bike according to standards before watching him measure the course according to course markings and the importantly, the required shortest possible route (SPR) in which some markings are ignored as the certifier measures what they deem to be the SPR. While the SPR was being measured, I removed myself from the course to avoid any interaction. Following the required post calibration of the measuring bike, the certified listed the distance completed in the 100-Mile USATF Road Championship was 100.00396. We strongly believe this measurement is the most accurate as it was done with a sense of urgency as close to the race as possible. We are disappointed the USATF waiting 8 months to perform this critical measurement and did so without our knowledge or involvement and did not share the same urgency we displayed to address the issue.”

I recently learned a post-race measurement of the February, 2022 Jackpot USATF 100-Mile course was completed last week. As a 5-year sponsor, underwriter and Race Director of this event, it befuddles me to understand how such a critically important measurement, done 8 months after the event, could be done with high-level confidence without my involvement. Since you were not one of the two USATF designated race officials on-site during this event, I will provide contextual background on events that occurred during our festival and subsequent directions and assurances I was given.

The Jackpot USATF 100-Mile race began the morning of Friday, February 18 and did not conclude until the evening of Saturday, February 19. At 12:10 PM on Feb. 19th, I learned from the local course measurement individual, Paul Fritz, that he was contacted by Mr. Brandon Wilson, who identified himself as a USATF race official, and asked to immediately meet him at the event at 1:00 PM to measure the course. I asked Ms. Lin Gentling, one of the two USATF race officials on-site, why the USATF felt it was appropriate to measure a course while an event was still in progress. She said she was unaware of Mr. Wilson’s intent to measure the course while the USATF race, plus 7 other races, were still in progress. She did not appear to even know Mr. Wilson, let alone know he was a presenting himself as a top USATF official.

It is incomprehensible to understand why the USATF felt it was appropriate and safe for two measurement individuals to enter a race, which was still in progress, on two bicycles, one of which was a large bulky electric bicycle (ridden by Mr. Wilson). At the time Mr. Wilson enter the course with Mr. Fritz, again without the permission or knowledge from either of the two USATF race officials on-site, the event was running at full capacity. Jackpot, which occurs over President’s Weekend at the City of Henderson’s most busy park, was not only filled with 400 runners from 8 different races (all in-progress) at 1:00 PM on Feb. 19th, the park was filled with public pedestrians. I learned of Mr. Wilson’s presence on the course when a 6-hour runner complained that “some guys on bikes” were impeding their progress on the course.

I confronted Mr. Wilson in the middle of the course and asked him who he was and what he was he doing. He curtly replied he was a USATF official and was measuring the course as it was not being run according to the race map. I told him he was creating an extremely unsafe condition for the 400 active runners on the course, along with the public folks enjoying the exact same paths used by the runners. I also informed him there was less than 1-hour left in the 6-hour race and that they were blocking turns with their bicycles. Numerous 6-hour runners complained of obstructions created by the two measurement officials as they literally went running by me during the last hour of their race. I told Mr. Wilson, if in-fact he was a USATF official, I had zero issues with him measuring the course, but to please wait until the event was over as he was creating a very unsafe running environment for the athletes. Mr. Wilson’s response was hostile and his tone was belligerent as he replied he had full permission from the USATF to measure during the race. I found this impossible as our race, while not as prestigious as an Olympic race, was in fact no different than an Olympic race as it was a USATF championship race. I commented you wouldn’t do this in the Olympics, so don’t do it now. When I pleaded with Mr. Wilson to measure after the race, reminding him the course was jammed packed at the moment, he said he had to return his rented electric bike very soon and didn’t have time to measure after the event. He refused to continue having a conversation with me and proceeded to continue measuring the course, despite his presence impeding 400 runners and creating a safety issue. I encourage you to speak with Ms. Gentling to understand the belligerence displayed by Mr. Wilson, as she eventually became aware of the unfolding situation.

Three years ago, I changed one-turn on the course due to a near collision between a runner and a baby stroller. I compensated for this turn change with precise cone placements on the course, especially the right turns. Due to soil erosion, a dirt section of the course gets rebuilt most years and as such, hand-wheeled measurements are done each year using two devices to ensure distances are correct. My understand, as communicated by the USATF, was that if and when a record potentially gets broken, the course gets remeasured. As I tried to communicate with Mr. Wilson, the turn change was not nefarious, as he was implying, and I 100% supported re-measuring the course, but the measurement should wait until the event is over and conditions are safe. I communicated the same to Ms. Gentling.

On March 1, 2022, I was informed by Lin Gentling that the MUT committee had met and the intention was to accept the race results pending post-measurement by David Katz. Also on March 1, 2002, Mr. Katz called to inform me that he was the top USATF measurement official in the country and due to the importance of a record-breaking performance that he, and only he, would be the one doing the post-race measurement. He informed me his decision would be final. In addition, he told me the MUT Committee felt it appropriate for me to cover his travel expenses which he estimated to be roughly $1,000. He went on to say he had a heavy travel schedule and it might be several weeks before he could conduct the measurement. I said this all sounded great and I was thrilled to learn the USATF was sending the top measurement official in the country. Lastly, I was specifically told by Mr. Katz to not discuss this matter with anyone. For the last 8 months, I followed Mr. Katz’s instructions, despite growing concerns about the diminishing integrity of the measurement with such a long passage of time. It shocked me to learn, nearly 8 months after this conversation, Mr. Katz was not going to do the measurement as communicated to us and was sending Mr. Wilson; the same person who jeopardized the safety of our race through his unprofessional conduct.

Over the last 8 months, I have diligently adhered to the exact instructions given to me by Mr. Katz and the USATF. Per guidance by Ms. Gentling, I took course pictures of course turns which I assumed would be used by Mr. Katz during his measurement. In addition, these turns had green paint markings and label pins were placed on the course surface. There has been over a dozen races at Cornerstone Park since our event 8 months ago and I’m sure the course is litter with multiple markings, in addition to our marks which I’m sure have faded away over the last 8 months or are hard to find. Knowing this, I do not understand why I was not asked to meet measurement officials last week to assist with the measurement. I had offered to do so in emails to Mr. Katz and you. I never received a response from either of you, despite being a 5-year race partner with the USATF. Trying to measure a course’s shortest possible route 8 months after a race, is challenging at best and open to subjectivity, especially if the measurement individuals don’t know the relevance of the green course paint marks relative to cone placement. Inches matter in a short loop course with over nearly 90 laps.

For the last 5 years, we have done more to grow exposure and recognition for elite ultra-runners than any other company in the country through our hosting of the USATF 100-Mile Championship race at our Jackpot festival. We’ve personally sponsored over $50,000 in elite prize pool money and have always lost substantial money by including the USATF race in our festival. We knowingly did this, as again, we are passionate in our efforts to advance elite ultra-runner. When we were asked 6 years ago by Howard Nippert to submit a bid to host the race, our assumption was there would be a supportive partnership spirit between us and the USATF. This has not been the case. The level of disrespect and unprofessionalism displayed by the USATF with respect to the post-race measurement is unacceptable, as are disparaging remarks I’m told are being made about me personally. As a 5-year partner, we expected the USATF to include us in a measurement of such vital importance and actively communicate with us. To keep us in the dark and having us learn through “the grapevine” that the measurement had been completed last Tuesday, was unprofessional. While we are confident in the course measurement performed the week after the race (measuring 100-miles) by a local licensed USATF official, measuring against fresh marks, we understand USATF will make whatever decisions they deem appropriate. Despite being treating the way have by the USATF, we will continue to follow the guidance given to me by Mr. Katz in so far as to not to discuss this matter with others. We will wait until USATF makes public comments on this matter before we publicly issue our commentary on the series of events surrounding this issue and the guidance we were given and followed.