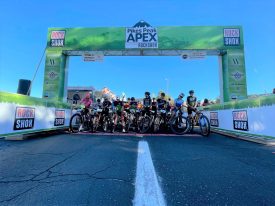 Racing started in earnest on the short, 11-mile technical time trial prologue on Thursday. Riley Amos, hot off his top-10 finish at the World Championships came out swinging to take the overall win and Evelyn Dong used her knowledge of the past two years to take the win in the women’s pro category.

Day 2 of the APEX was the new stage in Cañon City that crossed the Royal Gorge Bridge mid-race. A stiff 3-mile climb that gained 1800 feet right out of town pushed riders to their limits and created an immediate separation. Dong left the rest of the women’s field and ended up winning the stage by over 17 minutes before local star Deanna Mayles and Olympian Erin Huck finished. A group of men formed after the big climb and after they crossed the Royal Gorge Bridge mid-race, race leader Amos suffered a flat that put him back a few minutes. Finsterwald was able to get away from that group, soloing in just in front of Bear Development rider Lasse Konecny.

Day 3 saw the riders return to a lap of Rampart Range Reservoir but starting from the other side in Woodland Park. Dong continued her winning ways, dropping the rest of the women early in the stage while Amos was keen to push the pace and gain some time back on Finsterwald who was wearing the ASSOS leader’s jersey. Lachlan Morton and Alex Howes from EF Education and Olympian Todd Wells used their savviness to stay in the front group for a while, but in the end the high speeds of Amos were too much for the veterans. In the end Amos soled in but had only a few seconds on second place Brayden Johnson and Finsterwald finished in third, holding onto the GC lead. Kyle Trudeau continued his solid performances, holding onto 2nd place in the overall.

The final and 4th Day saw a shorter 20-mile stage with attacks from the gun with riders trying to mix it up. Dong seemed satisfied to take it a bit easier with a 20-minute lead in the GC, watching Mayles and Huck up the steeper climbs on the last day. In the end Huck was able to edge out Dong for the final stage win, but the GC didn’t change with Dong taking the overall win, Mayles in second, and Huck in third. On the men’s side, Amos pushed hard again trying to make up time lost on day two of the race. Amos did get a third stage win on the final day, but it wasn’t enough to move up to better than third overall with Finsterwald taking the overall win and Trudeau in second overall.

The 2022 Pikes Peak APEX presented by RockShox took place September 22nd through 25th. The world-class mountain bike challenge draws pros and amateurs for four days of riding on the slopes of Pikes Peak in Olympic City, USA. The APEX features new trails each year, along with some local classics that have made Colorado Springs a Rocky Mountain trail destination. Beyond the 4-day MTB challenge, athletes are also invited on the trails to participate for single days on the bike and 50k, 10k and 5k trail runs. The final day draws out the entire community as the event wraps up with The APEX Outdoor Festival & Expo in America the Beautiful Park.

The APEX supports Trail Stewardship and drives economic impact to the area in order to improve the trails and open space in the Pikes Peak region for the lasting enjoyment of its residents and visitors. The APEX, a Pikes Peak Outdoor Recreation Alliance project, was developed and is operated by Sports Strategies, a division of Tourism Strategies, LLC. For more information about the event, visit PikesPeakAPEX.com.

View all Releases by Sports Strategies