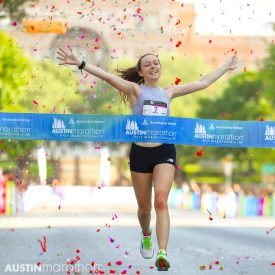 “Since reintroducing the program in 2017, we’ve seen the competition grow and overall times get faster,” said Jack Murray, co-owner of High Five Events. “Several racers have hit Olympic Marathon Trials times which is exciting to see happen on Austin’s streets.”

Athletes accepted into the Elite Athlete Field must meet the program’s standards. Those that meet standards will receive a comped entry into The Austin Marathon or Half Marathon and a comped entry into the 3M Half Marathon. In addition to prize money, there is travel assistance, and bonus money available based on times achieved in the past three years and on race day.

To be eligible for prize money and reimbursement, athletes must be accepted into the Elite Athlete Field and start the race. All athletes are subject to random drug testing pre- and post-race. Read more about program details, including eligibility standards, here. Interested athletes and coaches with questions can contact elites@youraustinmarathon.com. Deadline for submissions is January 15, 2023.

About the Ascension Seton Austin Marathon®: The Austin Marathon® will celebrate its 31st year running in Austin on Feb. 19, 2023. Austin’s flagship running event annually attracts runners from all 50 states and 30+ countries around the world. With start and finish locations just a few blocks apart, and within walking distance of many downtown hotels and restaurants, the Austin Marathon is the perfect running weekend destination. Participants can register on the website and choose to run for their preferred nonprofit.