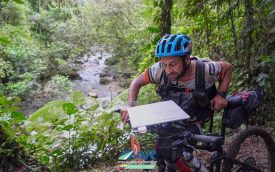 This year the Huairasinchi race in Ecuador took teams deep into the Amazon rainforest for an adventure unlike any the race had delivered before.

/ENDURANCE SPORTSWIRE/ – Huairasinchi (a Kichwa word meaning strength of the wind) is the oldest race in the Adventure Racing World Series, and always one of the toughest. The 19th edition started in the jungle town of Tena, from where teams began a 330km course which saw them paddle the remote rivers of the Amazon headwaters, trek through the rainforest on ancient native trails (culuncos), and ride muddy dirt roads between the villages and towns of the indigenous communities.

Santiago López of the organising company, Proyecto Aventura, said, “It was a real challenge to have an expedition adventure race in the Ecuadorian rainforest.

“It was something we have wanted to do for a long time, but it was almost impossible with kayaks. Having packrafts as an option in the AR world gave us the opportunity to build a route in places where almost nobody has ever been.

“The wild and pristine nature of the Amazon region gave the race a different feeling and a chance to discover very interesting places and cultures in our rainforest. We want people to see that Ecuador is not only mountains, but that it has an enormous diversity.

“For the organization this was a real challenge, and we have been working on this route for almost 3 years. We had to visit and talk with communities very deep in the jungle. This was the case with the Waorani community of Gareno and Dayuno on stage 2. This area is part of their territory and we worked with them to learn from their land and culture, and to understand how they manage tourism. They graciously invited us and the racers to visit their land and to discover how they live.”

The challenges the teams faced in a rainforest race were also considerable, including the constant humidity, and exceptionally difficult navigation in the forest. Another challenge was to use the dated, 1:50,000 maps and from the start many teams received a quick lesson in their interpretation … most of them went the wrong way within minutes!

“There was a road which was not on the map,” said US racer Jari Hiatt, who was racing with the Fairis Proflora team. “I should have realised we’d gone wrong more quickly and it was a sucker punch at the start. At least I learned very quickly not to trust the map as I normally would, and that saved us at other times in the race.”

The new ‘Andes Racing’ team did take the right way, and this helped them establish a good lead from early in the race. This team was lead by Felipe Munchmeyer, who previously raced with the Movistar Terra Aventura team, who have dominated the race for many years. However, that team had now split, and this year the race was wide open.

The race began at Arajuno and the opening two stages were long packraft/trek stages, which immediately took teams deep into the rainforest. The first packraft was on the Arajuno River, which was broad and fast flowing, including many class II and III rapids. Hiatt said, “It was an awesome paddle.The race did such a good job on the packrafting routes.”

When teams left the Arajuno River to trek cross-country with their rafts to reach another river, the jungle navigation and map interpretation, once again tested the teams, this time at night. A large group of teams took a wrong turn, missing checkpoint 4, and then trekking up the Río Sótano, which they’d expected to be descending, to get back to it.

Teams from Colombia and Costa Rica decided to turn back and short course the race, and others spent a long night lost in the jungle.

The Seti team from Colombia included Ricky Velez from the PC12 Adventure Race and he said, “Amazon races will always have their mystique. The rafting was very entertaining, then we continued on the first trek and reached PC3 relatively easily, but heading towards PC4 the suffering began. We searched for it for a long time and we could not find it and decided to withdraw and continue the route from stage 3. After that we gradually learned to read the 1:50,000 maps, which had little detail and were very out of date. The bike sections were easy and without orientation complications, but the treks were full of surprises!”

One of those surprises he took home with him, as he explains. “On a trek later on the course a dog from the area joined us. We scared him so he wouldn’t stay with us but there was no way, the dog continued with us all night. As the path had very difficult sections we had to carry him and named him ‘Huaira’.

“The next stage was a long bike ride and we were going to leave the dog, but he insisted on staying with us and we had to leave him tied up and crying. We told the organization that if they took him to Tena, we would take care of vaccinating him … and the surprise was that when we reached the finish line, they had “Huaira” waiting for our arrival. We wanted to find someone who loved him, but this dog stole my heart and I’m going to take him home to Colombia.”

So, after Arthur was rescued at the World Championshipsin 2014, another ‘Huairasinchi dog’ was rescued out of the Ecuadorian jungle! (The Hollywood film telling the story of Arthur is due out soon.)

The teams still racing continued down the much smaller Río Sótano. Hiatt said, “I took my packraft for a walk down the small river canyon, and was in and out of it all the time, then the canyon opened up at sunrise and we were in a really beautiful place in the forest.”

Andes Racing continued to lead, but by the end of the stage, when teams were trekking again, they slowed and were passed, and subsequently withdrew due to illness. Life Adventure Imptek took the lead and after two days of packrafting the race now settled into alternate biking and trekking stages.

Stage 4 included a rappel and a caving checkpoint, both memorable for different reasons. Racers emerged from the cave covered head to toe in a thick coating of sticky clay after sliding down narrow crevices to reach the checkpoint, and while on the ropes Martín Sáenz of Fairis Proflora said he was careful where he put his hands due to the very big spiders!

The final bike ride included a stop for an orienteering stage, and Life Adventure Imptek arrived only a few minutes ahead of FairisProflora. They raced close together in torrential rain to finish the race, and the weather affected the final trek and packraft. “We crossed one river arm in arm so as not be swept away,” said Hiatt, “and were told it was only ankle deep the day before. Then the race safety staff told us to put our packraft in further down the river, then further down again. There were two safety kayaks to accompany each raft, which was impressive.”

While Fairis Proflora completed what was now a short, but exciting, raft back to the finish line in Tena, Life Adventure Imptek chose to run all the way. They crossed the line first, but were carrying a 3 hour penalty for using outside assistance, so it was the Fairis Proflora team who took the win in a time of 63 hours 56 minutes.

The Fairis team has won before, when the race was held in Colombia, and it was another victory for an experienced team. Martín Sáenz  has raced more editions of Huairasinchi than any other racer, and is still top of the podium, and a delighted Hiatt said, “After 64 hours of racing, 1 hour of sleep, and a million experiences, we WON! It was a race, experience, and adventure that I’ll never forget!”

She added, “We had no issues with our lights, gear and food, and I was only stung or bitten once, but my arm felt on fire afterwards. Our feet were not too bad given how wet it was and most importantly the guys trusted me with the navigation. I had quite a bit of alone time, as I couldn’t talk to Kno (Bernardo Vintimilla) or Jorge (Brito), but I’m used to it.” She hadn’t raced with them before, nor had Sáenz ever raced with Fairis.

In third place were the San Juan Aventura team from Argentina, racing with Urtzi Iglesias of the Vidaraid team. He’s been working with and mentoring this ambitious young team and said, “The route was amazing. I love to walk and navigate through the jungle. Two of our team were not experienced in expedition races so we knew that there were teams stronger than us and are happy with the result. San Juan Aventura wants to reach the top ten in the ARWS rankings, and this is a big step towards that goal.”

At the final count 6 teams managed to complete the full course and López said, “For the racers, I believe this was a very different experience to past editions of Huairasinchi, with long paddle legs with packrafts, and amazing and hard treks in the jungle.

“With this race we started our preparations for the Adventure Racing World Championship 2024 in Ecuador. Next year we will have the 20th edition of Huairasinchi, and many new racers will be participating in their preparation for the 2024 World Champs.

“We’ve already revealed that ARWC 2024 will be in southern Ecuador, where racers can expect rainforest, mountains and also coast. Like the race this year, it will be an amazing experience, in a place Huairasinchi has not visited before, and we are looking forward to welcoming teams from all over the world.”

Next year Huairasinchi will take place from July 28th to August 3rd, and in 2024 the race will host the Adventure Racing World Championship for the second time.

The next race in the series is ITERA in Scotland, taking place from August 12th -19th.