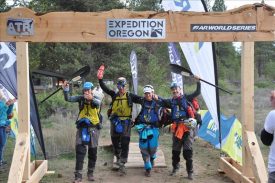 Expedition Oregon 2022 was a race which will live long in the memory of the teams who raced and survived it, and of the many thousands of fans who were gripped by the online race coverage

/ENDURANCE SPORTSWIRE/ – Expedition Oregon 2022 was a race which will live long in the memory of the teams who raced and survived it, and of the many thousands of fans who were gripped by the online race coverage. It was a true expedition, a great competition, and lived up to its title as ‘America’s Toughest Race’.

The 18 international entries included some of the most experienced teams on the Adventure Racing World Series circuit. The world #2 ranked team, ‘Vidaraid Adventure Team’ (Spain), were joined by top US racer Mari Chandler and started as favourites, but there was strong competition from the legendary Japanese team, ‘East Wind’ and from ‘Bend Racing Canada’, while many of the other strong Canadian and US teams had the potential for a podium place.

Just two weeks before the start, Central Oregon was hit with a huge snowstorm, blanketing half of the course with over 35 inches of fresh snow. The organising team from Bend Racing, had a tough time checking and replanning the course, and the route book included the line, “CPs 22-26 are buried somewhere beneath the snow and no longer with us”. Race Director Jason Magness told teams there would be more snow than might normally be expected in Spring, and added; “The beauty, challenge and diversity of this route is like no other course I have designed.”

The route covered 300 miles over 8 stages, with 36,800’ of climbing, and the first stage was a 12 mile trek designed to spread out the teams with night time route choice and navigation, following an evening race start. The stage had the instruction ‘snow shoes optional’, but they really weren’t.

Teams set off in light snowfall from Diamond Lake, then during the night a heavy storm dumped more snow and the teams moved more slowly than expected as they struggled in the conditions. This was to be the pattern for much of the race. Instead of Spring weather, the teams endured more and more snow, and severe winter conditions, testing their mountain and survival skills in a way few adventure races ever have.

Magness said, “The race was every bit as challenging as designed, and so, so, so much more. We almost pulled the plug on several sections because of the conditions, but the staff felt confident in both our ability to mitigate extreme situations with timely extraction of teams and the skill of the teams. Ultimately, it proved a wise decision in the race registration to accept entry only from teams with high levels of race experience and mountain skills. Expedition style teamwork played a critical role for each and every team, with the stages 1, 4, 5 & 6 more akin to Shackleton’s endurance epic than typical AR. It truly was America’s Toughest, and tested these amazing athletes to the brink.”

After the first trek and a backcountry, bushwhack of a bike ride, complete with a welcome stop in some natural hot springs, the teams took on a packraft descent of the North Umpqua River. Like many stages at Expedition Oregon this had a high degree of technical difficulty and teams were paddling through class 3 rapids. Capsizes and swims were frequent in the white water, even for the most accomplished paddlers, and hypothermia a risk for those in the water too long. Several teams chose short course options after this stage.

Stage 4 was a mountainous, 60 mile bike ride, which turned into an epic for the teams, and was a gripping, slow-motion, drama for the ‘dot watchers’ following the live tracking. Route choice is always a part of the navigational challenge in expedition races, so teams choose their own way … not always wisely. On this stage, all of the teams unexpectedly took a high route, where the snow was deep and progress inevitably slow.

On the tracking page viewers could see the expected route, which was much lower, and that the strongest teams in the world were moving at a mile and hour, for hours end, as they forced a trail through the deep snow. The fastest predicted time was 11 hours, it took the leaders over 24 hours, and they weren’t happy with the race organisers when they came out of the other side. The Race Directors said they’d no intention of the teams going so high, it was their choice! At the time Alex Provost of Team Bend Racing Canada said, “I hope everyone is enjoying the show, because we are working really, really hard out there.”

The weather didn’t improve for the next two trekking stages, if anything it got worse. On the mountaineering trek over Mount Bailey teams encountered high winds, severe cold and whiteout conditions. One team retraced their steps down the mountain from the summit checkpoint as a safety precaution, another just skirted their way around the mountain, and the Brazilian team ‘Black Mamba Aksa’ asked Team Peak Pursuit for assistance, which was willing given. The Canadian team said; “Sometimes we think of other teams as adversaries we are battling in the race, but more often we think of them as comrades.”

The Brazilian team were later rescued when a raft sank in a sudden windstorm in freezing temperatures. Commentators said it was their first experience of snow, so they were definitely the team most out of their element and comfort zone, but their calm determination carried them a long way around the course and won them many admirers.

There were other teams who needed assistance to move around the course, and Team Bend Racing Canada also hit the emergency button on their tracker, when Danish racer Lars Bukkehave became hypothermic. They were leading the race at the time, and the awareness and prompt action of his 3 team mates facilitated a quick and safe rescue by the race medical team.

There was less snow and better weather on the later stages of the race, which included orienteering stages, crossing a lava field, a shooting challenge and numerous rope and climbing stages. At a Tyrolean traverse checkpoint Ari Delashmutt of Team Bluejay (USA) took time out to complete a highline crossing of the rope – a first in adventure racing!

As the teams made their way towards the finish in Bend, Vidaraid were still in the lead, despite being the team who broke the trail for all the other teams on the stage 4 ride, but the dot-watchers were now treated to a cat-and-mouse chase by Team East Wind. The Japanese team would stop and rest for longer at each transition, Vidaraid moved further ahead, but then the better rested Japanese team moved more quickly and almost caught up to the leaders when they set off again. Which tactic would pay off, resting more, or keeping moving?

By the finish line, it was close, very close. On the final packrafting stage, which included several portages around big rapids, Vidaraid lead, but one of their rafts was deflating and Team East Wind was closing.

Vidaraid held on, and were first across the finish line, having collected all the checkpoints, to retain their title and claim a place at the AR World Championships in Paraguay in September. They spent 5 days and 57 minutes on the course, and Marco Amselem said afterwards, “’Adventure racing is about the unknown, and this time the unknown took over the entire race. We could never predict a snowstorm for most of the race, and we had to adapt constantly. This was a very challenging race, a lot more technical than last year’s.”

The Japanese team were only 35 minutes behind them and collapsed in tears on the finish line, overcome with emotion, and overwhelmed by all the experiences of the previous 5 days of racing.

‘Team Peak Pursuit’ overtook ‘Team BC Wild – Expedition Canada’ to complete the podium, and only these 4 teams managed to complete the full course, visiting all the checkpoints. Another 7 teams recorded a finish, having skipped some checkpoints to reach Bend before the course closed.

Reflecting on the race, Chelsey Magness said, “This race was by far the toughest race we have ever put on. The weather was something all of us had to adapt to in real time. The teams, the staff and the volunteers were all taxed by it, but because of our resilience, we all came out stronger for it. We are in absolute awe of every single athlete who took part. The stories from this race will be with us for years and for that we are grateful. We look forward to our future races as we learned so much and will continue to work hard to make Expedition Oregon – America’s Toughest Race, better and better.”

Expedition Oregon – America’s Toughest Race was Round 3 of the 2022 Adventure Racing World Series.

The next race in the series is Expedition Canada, taking place from June 3-11th.