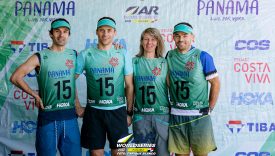 The Adventure Racing World Series Rankings have been updated and there is new World #1 ranked team.

/ENDURANCE SPORTSWIRE/ – The update covers the past 4 months, which have been the busiest ever in the history of the AR World Series. Ranking points have been added from 6 World Series Qualifiers on 4 continents, and from one Demonstration race, and some teams are also adding ranking points for results in their Regional Series.

Twelve of the shorter Regional races have taken place in the past 4 months on 5 continents, and the rankings for each region have also been updated. Global adventure racing has bounced back post-Covid, and is thriving and growing in the Adventure Racing World Series.

The headline news is the elevation of Estonian ACE Adventure/La Sportiva to the #1 spot, pushing the World Champions, The Swedish Armed Forces Adventure Team, back to #2.

The Estonian team has raced all over the world for the past 12 years, and after so many years of trying, they won their first ARWS Qualifier at Expedition Africa in Lesotho in April. Now, they are the world #1 team, and they’ve even found time to organise their own ARWS Europe race. (The Tactical Foodpack Expedition Estonia race.)

Remarkably, they have scored all of their points with the same 4 racers; Rain and Silver Eensaar, Reeda Tuula Fjodorov, and Timmo Tammemae. Their total of 4400 points came from regular racing, so they had 4 counting scores, and a consistently high level of performance. They won in Africa and were second at the Nordic Islands Adventure Race, AR Panama, and the last years World Championship.

The Swedish Armed Forces team had only 3 scores to count for their 4000 points, including a recent comprehensive win at Adventure Race Croatia. (They were due to race at RIF Spirit in ARWS Europe, which was postponed due to bad weather, and had they been able to win there and claim 500 ranking points, would have kept the #1 position.)

The two teams will face off at the 2022 Adventure Racing World Championship at Expedicion Guarani in Paraguay in September. The Vidaraid team (Spain) are third in the world ranking, and Brazil Multisport are in 4th. There are 8 different nationalities in the top 10 and a total of 296 teams have a world ranking.

After finding out about their #1 position Silver Eensaar said, “It is a humbling situation – being ranked no. 1 in the world. We started our expedition racing journey in 2010 and at that time the top teams’ speed through long courses seemed an impossible dream for us. We were physically stronger than we are now – definitely faster at running 10k – but were not able to match the speed of top AR teams due to various mishaps, mistakes, random stops, getting sick etc.

“Getting better, building a team and collecting experience racing around the world has been a fantastic and rewarding journey. We are far from considering ourselves the best team in the world, but we are confident that whatever the race and environment, we are able to move through the course efficiently and when needed also occasionally visit the pain cave.

“Exploring and enjoying the world’s diverse nature and culture with the fantastic adventure racing community is a blessing. Greetings to all our competitive friends around the world – the Paraguay World Championships are not far away and we’ll see you there!”

One team who will be there are Brazil Multisport. They are another team who race consistently and are the highest ranked team to have embraced racing in both the World Series and their Regional Series. They took 1000 points for winning the South America Regional Series in Chile last year, and carrying those points into the World Rankings has kept them in 4th position. (Without them they would be ranked #7.)

Camila Nicolau explained their approach. “It is interesting to race both the World Series events and the shorter races in the Regional Series. We can bring in someone new to the team and test them in the shorter races. It gives them the chance to travel overseas and get international experience in a race which is not so long or competitive.

“I prefer the longer race as that’s my style of racing, but it’s hard on the body and very expensive, so we can’t race them all the time. We chose 2 or 3 a year, and then have the shorter races to practice our teamwork and help us to stay competitive.

“We knew we had an advantage when the South American Series races were held last year and in other parts of the world teams could not race, but now I think things will even out as more teams around the world can race ARWS Regional races.”

Her team are the clear leaders in the South American rankings. They have maximum points, having won all their races (in Paraguay, Brazil and Chile), and they will go into the World Championships as the defending champions for Expedicion Guarani. It’s a race where some of their team members have raced and won almost every edition, and they know it’s their best chance to be World Champions.

Just as dominant in their own region are Team Merrell Songlines, who won the recent Merrell Transkei Tuff race in South Africa. They’ve won 5 out of the last 6 ARWS Africa Series races and are 15th in the World rankings largely thanks to their regional points. They will be racing at the World Championship in Paraguay as well.

Asia and Oceania are both regions where the race programme has recovered more slowly from Covid restrictions, and the first race in Oceania was hit by another weather cancellation, but thanks to the ongoing dedication of the Race Directors, some races have taken place.

The new ARWS India champions, following an amazing race in monsoon conditions, and the #1 ranked team in Asia, are The Skyrunners. The next race in the Asia series is in Malaysia, and the series will expand into more countries next year.

There is no change at the top of the Oceania rankings, with Team Thunderbolt keeping and strengthening their #1 position after their recent win at Geoquest.

Team GuReus are 6th in the Oceania rankings, again showing the reward for regular and consistent performance. They have not made the podium, but have 4 counting scores as they’ve kept their squad to 5, and scored in all their races.

The Europe Region races started this year with 3 brand new events, and the winners of the Nirvana AR (Italy), Raid Lowlands (Netherlands) and the Tactical Foodpack Estonia Raid, are all tied on second place in the Europe ranks with 500 points. Ahead of them, and the only European team to score in two races so far, are the French team Pyrenees Experience, who raced in Italy and the Netherlands.

The ARWS North America Regional Series will start next year in partnership with the USARA, and the next ranking update, which will include the 2022 Adventure Racing World Championship, will be announced at the start of December.

You can find the full world and regional adventure racing rankings at www.arworldseries.com.