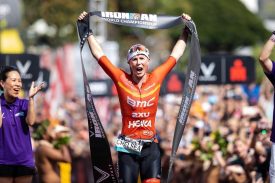 Auckland, New Zealand-October 14, 2022/ENDURANCE SPORTSWIRE/ – Endure IQ, the science-backed endurance sports performance and education company offering World-class triathlon training programs and 1:1 coaching, celebrates the success of their 2022 VinFast IRONMAN® World Championship winning Triathlete, Chelsea Sodaro, along with their 25 age group triathletes that crossed the finish line in Kailua-Kona. Making history just 18 months after giving birth, 33-year-old mom, Chelsea is the first American woman to win Kona in 25 Years, since 1996, when Paula Newby-Fraser won. She is also the first female rookie to win in 15 years with a time of 8:33:46.

“Chelsea and I believed that she would one day win this race (she certainly has all the goods), but for it to happen so soon was a shock for both of us. We talked about the top three being excellent, but a win is out of this world! This is a such a team effort from many people involved. Chelsea really is a class act with all the goods to do well at Kona, my feeling this isn’t the last time we will be seeing Chelsea Sodaro on top of the podium in Kona,” said Dan Plews, PhD, Founder of Endure IQ, Applied Sports Scientist, Researcher and Olympic and World Champion athletic coach.

Endure IQ Founder & Head Coach, Dan Plews, PhD, has been working with Chelsea Sodaro since she was six weeks pregnant and has been on the journey with her all along.

“My coach, Dan Plews of Endure IQ, is absolutely brilliant. He’s actually the amateur course record holder here – and I did NOT beat his record (!). His training programming and scientific application is on point, which I believe is very important to do well here in Kona. Especially when you’re a rookie. You can’t exactly draw on past experiences, so it’s even more important to be planned and thorough with the preparations,” Chelsea Sodaro Professional Triathlete.

Endure IQ is equally proud of its 25 Age Group triathletes crossing the finish line at the 2022 VinFast IRONMAN® World Championships in Kailua-Kona. Coming together from around the globe, these athletes are from Europe, Australia, New Zealand, South America, Africa and the USA. They range in ages 22 to 65, span from beginners to seasoned racers, and they showed up to compete on one of the most challenging racecourses in all of endurance sports. Endure IQ athletes leveraged both 1:1 Coaching and The Endure IQ Training Squad to get the training tools and coaching they needed for success.

“Kona is a brutal course. Just getting to the start line is one thing but getting over the line in another. All of our EndureOns (as we like to call ourselves), did battle with the island and put of some exceptional performances. It’s simply exceptional, and something that I couldn’t be prouder to be a part of,” said Dan Plews, PhD, Founder of Endure IQ.

Endure IQ is an endurance sports performance and education company that empowers athletes and coaches with science backed World-class triathlon training programs, 1:1 coaching, courses, and community. Our vision is to teach the key aspects of endurance performance from a scientific perspective, with great practical application to athletes who live and breathe endurance living and training around the globe.

View all Releases by TSG MEDIA

“You Are An IRONMAN”: How Mike Reilly Became The Voice Of IRONMAN