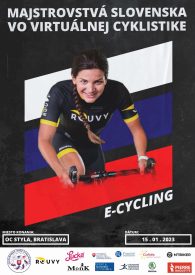 Bratislava, Slovakia / After 4 completed rounds of the Slovak eCup, the e-cycling series will culminate this Sunday, January 15th with a fight for the home championship jersey in virtual cycling. The best Slovak riders in each category will battle in Styla Arena in Bratislava. The worldwide cycling community can join the pros from home online and try to beat the local champions with real watts on ROUVY.

Bratislava, Slovakia / January 12, 2023 /ENDURANCE SPORTSWIRE/ – After 4 completed rounds of the Slovak eCup, the e-cycling series will culminate this Sunday, January 15th with a fight for the home championship jersey in virtual cycling. The best Slovak riders in each category will battle in Styla Arena in Bratislava. The worldwide cycling community can join the pros from home online and try to beat the local champions with real watts on ROUVY.

Although the current situation allows all forms of sports to be carried out with no restriction, e-cycling continues to grow especially in the winter months. For the second time, a series with four rounds took place under the banner of the Slovak Cycling Federation (in Slovak: SZC), in which Slovak riders could qualify for the 2nd edition of the eMSR finals. Based on the qualifying results, the riders were selected and so this weekend 20 elite men, women, juniors, and hobby riders will gather in Bratislava in person. ROUVY allows anyone to join the selected competitors from home, but the in-person competition will also have its own separate leaderboard at the event location.

The race will take place on a 30.1 km undulating track, which was part of the 2nd stage of the tour “Okolo Slovenska” (in ENG “Around Slovakia”) last year. Specifically, it is a section from the vicinity of Topoľčany, with 498 meters of elevation. Not only riders directly from the Styla Arena can participate, but anyone with a smart trainer and ROUVY account. Everyone who participates in this event will enter a draw for 10 interesting prizes from our sponsors – e.g. a professional jersey of the Cofidis team, a nutrition package from the Monk company, representative items of the Slovak Cycling Federation or cycling tools, and a voucher from the MTBiker company. We cordially invite you to join and also watch the race through the live broadcast on the YouTube channel of the SZC,” says Lukáš Riha, the race director. All participants will be able to experience and utilize the new ROUVY feature, OmniMode, which enables riders to see certain portions of the track and surrounding peloton in 360° views. This will make the battle for the national title even more passionate and hotter.

“It is the 2nd year of the winter series of the e-sport Slovak Cup and this time we have 25% more competitors and surpassed the 900 registrations mark. New interesting names appeared on the riders list, which shuffled the nomination for the next 2nd Slovak championship in e-sports. We will see who will be the first to cross the finish line and wear the jersey of the champion of Slovakia,” summarized Riha.

BROADCAST
Live stream will be available on SCF Youtube Channel.

REGISTRATION
Registration is free of charge and open HERE. The race starts at 11:00 CET.###

Slovak Cycling Federation or SZC (in Slovak: Slovenský zväz cyklistiky) is the national governing body of cycle sports in Slovakia. Slovak Cycling Federation supports physical activities and related sports for all amateur and professional cycling. SZC has 135 registered clubs and 1756 members and is a member of the Slovak Olympic committee.
www.cyklistikaszc.sk

ROUVY is a digital racing platform for athletes all over the world to compete, ride with friends for fun, do workouts and much more. ROUVY offers thousands of virtual locations and training options, including the chance to take part in races and cycle through the entire route catalog. Thanks to simulated but fully realistic efforts, ROUVY is the best option for the most ambitious and toughest athletes to prepare for the next race day.