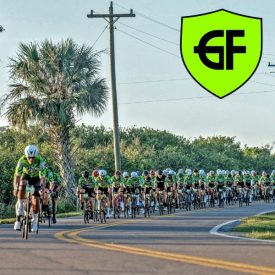 At the finish, however, there was a controversy during the antidoping controls administered by USADA: fourth place finisher Elias Montañez Barros (Merida, Mexico) sprinted away faster from the antidoping chaperone than to the race finish. After a hectic chase, he was found at his car, changed and ready to leave.

First he pretended to be someone else but his wristband identified him. He then was brought to the USADA testing tent where he was explained the consequences of declining to be tested: a lengthy racing ban. Yet, he refused to get tested and walked off. And not only that: he raced a week later in his home Merida and finished third there. Furthermore, he accused GFNY and USADA for running illegal antidoping controls and smearing his reputation.

Barroso received a four year suspension from USADA for “evading sample collection or refusing or failing to submit to sample collect without compelling justification.”

In addition to this four year, global racing ban starting November 30, 2022, he received a lifetime ban from racing any GFNY. Montañez Barroso has been disqualified from all competitive results obtained subsequent to GFNY Florida Sebring.

“There is the saying you can’t make a racehorse out of a donkey,” says GFNY CEO Uli Fluhme. “And I long believed that. But I’m no longer sure.”

“In the lead group of four that I watched from the race director’s car, he clearly stood out. The other riders looked great and smooth on their bike, like experienced riders do with thousands of miles in their bodies. Barroso on the other hand looked uncomfortable and moved a lot on his bike. He didn’t look the part. Why was he in this group of elite riders and ex-pros, all guys who train 15,000-20,000 miles per year? Now we know. Modern drugs are powerful and clearly able to drastically distort true performance levels.”

“IC testing is often dubbed an ‘IQ test’. But it also means that athletes have to microdose or stop taking drugs earlier before the race. Add to that the performance detrimental anxiety of actually testing positive. Half times of drugs aren’t an exact science because they depend on the athlete’s metabolism and factors like hydration. All this forces a doper to take less drugs. And if they don’t expect to get tested at all – like Montañez Barroso – then IC testing is obviously as effective as out of competition (OOC) testing.”

OOC testing remains a key pillar of GFNY’s antidoping strategy since 2012 when GFNY was the first mass participation race to do so. GFNY keeps exploring ways to keep its races as clean as possible. The vast majority of riders race clean and deserve this effort.

“Sadly, we’re quite alone among mass participation race organizers with our antidoping actions,” Fluhme adds. “I’ve lobbied for two decades for antidoping at mass participation races but it’s costly so most prefer not to spend money on it. While we keep doing what we can, I highly encourage riders to choose wisely where to race. At GFNY, dopers are not welcome – and we make sure they know.”

USADA adds in their press release: “In order to aid athletes, support team members, parents and coaches, USADA provides clear instructions on its website on the testing process and prohibited substances, how to file and update athlete whereabouts, how to obtain permission to use of necessary medication and the risks and dangers of taking supplements as well as performance enhancing and recreational drugs”.

Working with partners around the world to deliver a first-class experience, GFNY Global Endurance Sports Series puts its athletes first.

30-plus events held around the world. View the latest calendar here

Top 10% (20% at regional championships) of finishers in each age group qualify for the Elite Qualifier Corral at every GFNY World event.