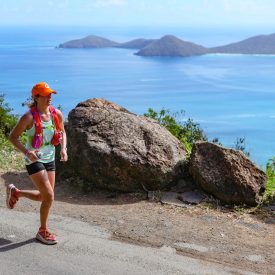 It’s a 33.74 mile (54km) ultramarathon that circumnavigates Tortola with only 22% on the flat and the rest on hot and humid hills with 12,000 feet of elevation change

/ENDURANCE SPORTSWIRE/ – The eighth edition of the Tortola Torture ultramarathon will take place on Saturday, April 15, 2023 on the island of Tortola in the British Virgin Islands.

The Tortola Torture is open to individuals, 2-person, and 3-person relay teams.  It’s a 33.74 mile (54km) ultramarathon that circumnavigates Tortola with only 22% on the flat and the rest on hot and humid hills with 12,000 feet of elevation change. The steepest gradient is 33.33%. It has 6,587 feet of climbing over 12.8 miles, and 13.1 miles of descent. There is only 7.5 miles of flat running for the entire course.

This view-laden race starts in Road Town, the capital of the British Virgin Islands, and winds its way clockwise around Tortola.

After the race Avery said: “The climbs, especially coming from Colorado, were 100% right on target. I knew that was ahead. The biggest struggle or challenge throughout the entire day, and it never really ended from start to finish was the heat and humidity. The real issues kicked in me for me about mile 22.”

But he summed up: “A screaming hot adventure through the winding roads of Tortola Island. The steep ascents and descents combined with the beautiful blue water views will leave you breathless. This is a bucket list race that will be one you will remember for the rest of your life!”

In 2017, visiting runner Bree Thorpe from Las Vegas, won the race with a storming time of 04:58:26, and set a new female course record by almost 28 minutes.

“It was a fantastic experience,” said Bree after the race. “I think one of the best ways you can see another country is by running around it. You have to really approach the race like an ultra rather than a road race and really pace yourself at the beginning.

“The course is just the right amount of torture. It leaves you feeling like a badass but you can also have fun at the same time. There are easy parts, it hits you with hard parts in the middle, and then there are spots of respite down the hills. The views take your mind off the fact that you’re racing. You get caught up in how beautiful the location is and you forget that you’re dying as you climb up a massive hill.”

Famed ultra runner Jenn Shelton was on the course to cheer on Bree: “It has the feel of ultra running 15 years ago, when ultra running was a little more real. It has that community feel and the excitement of 15 years ago when I was getting into the race which is really, really cool.”

Mourant, platinum sponsor, is a leading offshore law firm, advising on the laws of the BVI, the Cayman Islands, Guernsey and Jersey.

Nora Hazel Point (NHP), a luxury private estate on Tortola, is a gold sponsor. NHP is providing two awards: Nora Hazel Point Second Half Award for fastest time from half way mark (Sage Mtn) to finish; and the Nora Hazel Point Corporate Cup for the top 2 and 3 person teams (must all be employees of same company).

The Tortola Torture banned the use of disposable bottles on the race course in 2017. By using reusable five-gallon jugs and coolers, organisers eliminate the use of over 1,200 half litre bottles. All racers will be given a HydraPak SpeedCup for 2023.

To find out more about the event and registration, visit: www.tortolatorture.com

View all Releases by Alastair Abrehart