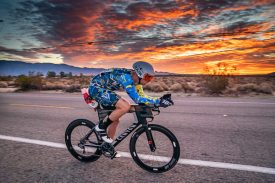 Boulder, CO /ENDURANCE SPORTSWIRE/ – Two weekends ago while many eyes in the cycling world were focused on Sea Otter Classic there was serious racing happening in the peripheral vision of the sport. The 10th edition of the 6-12-24 World Time Trial Championships (WTTC) was happening in Borrego Springs, CA.  The sold out race field was comprised of 200+ racers from 14 countries, 25+ States and 4 continents. With a balanced field of veteran and rookie racers the competition was fast and furious down to the last minute. The weather was both mild and challenging at times with racers enjoying cooler temperatures  but also feisty winds.

The 24-hour men’s solo race was a tough battle from the start. Shane Trotter (USA) set out at furious pace only to be hampered by physical issues later on which dropped him into a second place finish.  Marko Baloh (SLO), as is expected from the 24-hour veteran, raced at an incredibly steady pace giving hims the overall win with 501.6 miles. Baloh has exceeded the 500 mile mark, five times at the WTTC, the only racer to that. Rookie, Josh Stockinger (USA) finished third with 436.8 miles.

Breaking the 400-mile in 24-hours barrier for women is a rare occurrence. This year the entire overall podium did just that. Relative newcomer to ultra-racing, Christie Tracy (USA) won the overall race with 442.8 miles. Caroline Braad Hansen  (DEN), finished second  with 415.2 miles. WTTC rookie racer, Paige Redman (USA) rounded out the top three with 411.6 miles. The stunning performance by all three racers was incredible to watch throughout the 24-hours of racing.

Ryan Collins (USA), one of the youngest racers in the entire field, won the 12-hour race with 280.8 miles setting  an age group record and missing the overall record by only 5 miles. David Potter (USA) took second with 258 miles. Luis Icazbalceta (MEX)  finished third overall with 254.4 miles.

Taking the top podium spot for the women, after a dominating performance, was Alyson Watson (USA) with 240 miles. Second overall was Rose Hewig (USA) with 213.6 miles. Standing on the third step overall was rookie, Tami Leonhardt (USA) with 208.8 miles.

The men’s 6-hour race was absolutely the race of the weekend!  The race was won by returning champion Louie Amelburu (USA). Amelburu rode in second place for a large part of the race. He turned in his fastest lap on the final lap of the race, overcoming a 26 second deficit to win by a razor thin 2 second margin. Second place was held by John Czajkowski (USA), a rookie from Southern California. Mark Schaefer (USA) finished third just 2 minutes ahead of fourth place. This race was one of the most exciting races ever at the WTTC.

The women’s 6-hour race had some familiar faces on the top steps. Felicity ‘Flick’ Joyce (AUS), the coach and leader of Team Flick, stood on the top of the podium once again. Joyce completed 128.4 miles and fell just a few miles short of setting a new overall record even after a month packed full of racing including two triathlon world championships.  Second place was clinched by Donna Phelan (USA), for the fourth  time, with 118.8 miles. Rounding out the top three was Ashley Wolfe (USA) with 118.8 miles, just minutes behind Phelan and setting a new age group record.

The racers all set impressive standards for future participants. The excitement and quality of racing was unparalleled!  The 2022 race dates will be announced soon along with the opening of registration. The race is expected to sell out quickly once again. More information coming soon!