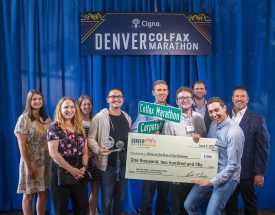 Denver, CO /ENDURANCE SPORTSWIRE/ – The Denver Colfax Marathon concluded its 2022 marathon season by awarding $100,000 to nonprofits and schools across Colorado.

The marathon recently handed out over 75 checks to dozens of its charity partners at its annual Marathon Awards Celebration in June.

“It’s such a unique program,” said Andrea Dowdy, CEO of the Denver Colfax Marathon. “The Marathon Awards Celebration is a wonderful way to honor our winning relay teams who are running for their favorite causes in Colorado. We are so proud of our mission of giving back to the local community.”

The Denver Colfax Marathon has one of the largest charity partner programs in the country, with over 150 non-profits using the marathon to raise funds and awareness each year.

The marathon offers a one-of-a-kind platform for its marathon relay teams: Teams of 5 in corporate, government and open divisions compete for prizes of up to $2500 that go directly to a nonprofit or school. This Denver Colfax Marathon Relay is now the largest in the U.S. and offers a yearly charity prize pool that totals $100,000.

The Denver Colfax Marathon is a nonprofit itself (501c3), with a goal of giving back every year. In addition to its awards, the marathon has helped its charity partners raise over $2.5 million every five years.

“We’re always looking for nonprofit partners that share our commitment to building healthier communities, and Denver Colfax Marathon certainly rises to that occasion,” said John Roble, the Southwest Region Vice President of Cigna. “Cigna and our teams, especially here locally, are very much committed to giving back to the communities where we live and work.”

The marathon welcomed Cigna as its new title sponsor this year. This partnership promises a greater dedication to race athletes and the Colorado community.

On average, 20,000 people participate in the Denver Colfax Marathon race weekend every year, making it Denver’s largest running event. It is the city’s only marathon and one of the top 25 largest marathon weekends in the country.