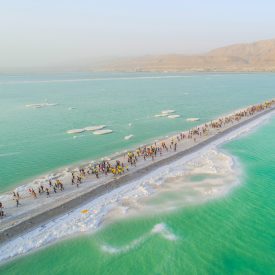 Registration is open for 2023 edition

The Dead Sea Marathon is being held for the fourth year and will offer participants a unique running experience in areas they have never run in before, alongside ancient salt crystals, in front of the magical desert landscapes and on the eastern border of Israel.
All runners will run straight onto the sea towards the border with Jordan, on a dirt embankment that has never been trodden on and which has been specially adapted for the benefit of marathon participants. All routes are circular, with minimum asphalt and maximum view.

Race production is stepping up, as we search for partners and collaborations around the world – this year our focus is tourist partners, such as travel agencies, group leaders and adventure tourism operators.

Mayor of the Tamar Regional Council, Mr. Nir Wanger: “The name ‘Dead Sea Marathon’ is already becoming a household name. This is the most unique marathon in the world that cannot be replicated anywhere else. Running on the Dead Sea is a memorable experience and has many benefits. The Tamar Regional Council has turned the marathon into a traditional winter sports event in Israel. I invite the public to come, run and experience the magic of the Dead Sea! ”

Born in the French Alps in 1947, Salomon is committed to pushing the boundaries of outdoor sports through the creation of innovative equipment that allows people to play, progress and challenge themselves in their chosen outdoor sports.

Salomon’s core values ​​match the innovative race at the lowest place on earth, in a landscape that is nothing like anywhere in the world.

Wide range of courses to accommodate all levels:

● 5km – a comfortable running and walking route for those who enjoy the running experience.

● 10km – running on the dike out to the sea and returning along the new Dead Sea promenade.

Due to security reasons, only once a year the race is granted the permits to use the dikes for sporting purposes, this gives the runners the opportunity to discover breathtaking views that have been observed only by employees of the Dead Sea factories or security personnel.

The embankment serves as the border area between the Israeli Dead Sea and the Jordanian Dead Sea and passes as a border without fence or barrier between the countries, which maintains a common and peaceful daily routine between the two sides.

All routes cross the sea over the famous gravel dikes, routes are mostly on a compacted and flat fine gravel area. The event will be secured by security forces – police and army.

The race takes place with the assistance and support of the Israel Chemicals Company, the Dead Sea Drainage Authority, and the Governmental Dead Sea Protection Company.

The Dead Sea Marathon was created over the foundations of the old Ein Gedi Race, which for over 30 years, have hosted tens of thousands of runners and was an anchor point in the annual race calendar of amateurs and professionals, who were addicted to the magical and quiet landscape. As a continuation of the commemoration project from the end of the half marathon, an event will be held in memory of Tomer and Giora Ron, members of Kibbutz Ein Gedi.

The race producers offer accommodation packages tailored to runners at attractive prices in a variety of hotels in Ein Bokek, including packages for one night only. Many of the hotels offers well-being centers with spa and medical treatments.

The Dead Sea Land Marathon is professionally recognized and a standard mark by the the Israeli Athletics Association, and the distance measurements are carried out by a certified surveyor.

Tamar Regional Council and Forum Productions invite runners to take part in an international marathon that establishes itself as a “bucket list” race, running on the all-encompassing route and crossing the Dead Sea, alongside ancient salt crystals and facing the magical and famous desert landscapes.

Prices: Registration prices will range from 110 NIS to 450 NIS, depending on the requested allotment and the timing of registration. Number of participants is limited.

Visit the site for further information: 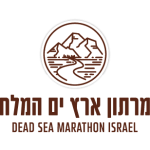 View all Releases by Roi Shwarts