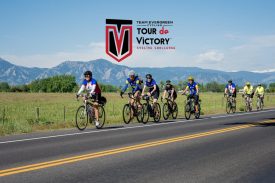 Scheduled for July 16, 2022, in Boulder, CO, Tour de Victory charges into its fourth year to benefit people with Parkinson’s worldwide

Boulder, Colo., May 5, 2022/ENDURANCE SPORTSWIRE/ – The Tour De Victory Cycling Challenge, a unique Colorado charity ride that raises funds and awareness for the Davis Phinney Foundation, is now open for registration and their list of 2022 sponsors and partners has been released.

This year marks the fourth that Team Evergreen Cycling has partnered with the Davis Phinney Foundation to host this signature ride through Boulder County. Together with the Foundation’s Team DPF, sponsors and partners include Skratch Labs, Primal, Cityworks, and Trek Bicycles.

“After a very successful return last year, the Tour de Victory is poised for another great ride to benefit people with Parkinson’s everywhere,” says Tom Palizzi, Founder and Ride Director for Tour de Victory. “We made a big impact last year to raise funds and awareness for the Foundation and the message that you can live well with Parkinson’s. For this year’s event, we’ve added a Parkinson’s-friendly 20K route well suited for those less accustomed to long distance rides, but registration for this loop is filling up fast! Excitement continues to build as we look to sign on more local businesses and teams.”

Tour de Victory and Team DPF’s list of brand partners and sponsors include:

The event’s goal is to support the Davis Phinney Foundation’s robust education, research, and wellness program. The Foundation invites individuals, teams, and sponsors to come together, raise funds, and unite to support Parkinson’s awareness. And in keeping with the Foundation’s mission to always provide Parkinson’s education and resources free of charge, cyclists living with Parkinson’s can ride any of the three distances for free. Research shows that people with Parkinson’s experience significant benefits from pushing pedals regularly, so gathering with friends and family to do just that will inspire others affected by Parkinson’s to do the same.

With ride day scheduled for July 16, Tour de Victory has courses designed for everyone, from the 20-kilometer beginner-friendly loop to the more challenging 50-kilometer and 100- kilometer rides. All rides begin and end at the scenic Gunbarrel Brewing Company, where the event will be followed by a festive lunch and cold beverages for all riders.

Ride registration for individuals and teams will continue until the event sells out. To register, create a fundraising page, or form a team and go to www.tourdevictory.com.

Living with Parkinson’s and want to ride? Email teamdpf@dpf.org to receive a complimentary registration code.

The Davis Phinney Foundation was founded by Olympic cyclist Davis Phinney in 2004 to help people with Parkinson’s live well today. The organization’s focus is to provide programs, early-stage research, and resources that offer inspiration, information, and tools that enable people living with Parkinson’s to take action to immediately improve their quality of life. Parkinson’s is the second most common neurodegenerative disease – second to Alzheimer’s – and affects more than one million people in the United States. The Foundation’s work impacts hundreds of thousands of individuals and families each year.

Team DPF is the grassroots fundraising community that supports the Davis Phinney Foundation through participation in athletic and community-based events. With a focus on fun, personal empowerment, and fundraising for Parkinson’s, Team DPF welcomes all ages and abilities. With roots in cycling, Team DPF also extends to runners, climbers, swimmers, community events, and more.

View all Releases by DPFPR