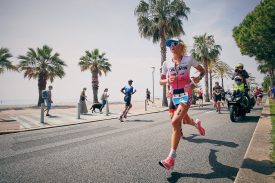 Challenge Frèjus and Challenge Cagnes-sur-Mer, both on the Côte d’Azur, have joined the Challenge Family race calendar for 2023, bringing two new middle distance races to the south of France next summer.

/ENDURANCE SPORTSWIRE/ – Challenge Frèjus and Challenge Cagnes-sur-Mer, both on the Côte d’Azur, have joined the Challenge Family race calendar for 2023, bringing two new middle distance races to the south of France next summer.

On 13-14 May, Ekoï Challenge Fréjus is a two-day family triathlon festival with five races for adults and three junior races. Day one features the FFTRI Fréjus Grand Prix as top short course athletes race for the French Club Championship. The weekend culminates with a sprint distance plus the flagship 113km middle distance over a course that combines the golden sands of Fréjus beach with a bike that takes in the beautiful Var countryside, through vineyards, picturesque stone villages and includes a climb up the Col du Bougnon with its stunning views of the Gulf of St Tropez, finishing with a fast, flat ocean-front run.

“Thanks to the support of our mayor, David Rachline, and his deputy in charge of sports, Patrick Perona, Fréjus is happy to see its triathlon evolve,” said sport councillor, Fabien Roux. “Sport is an essential pillar of Fréjus’ social life, we are continually working to improve the range of sports events and the attractiveness of the area through sports tourism.

The Fréjus Triathlon with its FFTri Grand Prix, was a great success in its first edition, and has now taken on a new dimension by joining forces with Challenge Family, which needs no introduction, in order to grow nationally and internationally.”

Challenge Cagnes-sur-Mer on 11 June 2023 promises to be one of the most beautiful triathlons in France located in the heart of the French Riviera between the sea and the mountains. Following the 1.9km swim in the Mediterranean, athletes will cycle through the magnificent playground of the Nice hinterland, including the 10km ascent of the famous Col de Vence, before finishing with a run set entirely between the sea and palm trees.

“Cagnes-sur-Mer has always promoted sport in all its forms,” said Louis Nègre, mayor of Cagnes-sur-Mer. “Sport is an essential part of our society and is inclusive of all our citizens, without exception. In these troubled times when society is losing its bearings, we need to surround ourselves with values that underpin cohesiveness and solidarity. Respect, effort and team spirit carry a strong social message. We are proud to welcome Challenge Family in 2023 which embraces the very same sports as does our beautiful region – swimming, biking and running. The race will be hard but will perfectly illustrate the notion of effort, collaboration, joy and healthy competition which aims to take us beyond our limits. This commitment is an integral part of our civic DNA. I wish you all the best of luck, but above all, don’t forget: the important thing is to participate!”

“The Côte d’Azur is a stunning destination, long favoured by triathletes for its ideal climate and spectacular terrain,” said Challenge Family CEO, Jort Vlam. “Joining forces with the TriGames team and having not one but two new middle distance races, while continuing the respected Grand Prix FFTRI de Triathlon, promises for an exciting summer of triathlon in the region. The triathlon festival of Challenge Fréjus ties in perfectly with our ‘all about the athlete’ commitment to every ability and every age of triathlete. Just a few kilometres from Nice, Challenge Cagnes-sur-Mer has all the makings of a must-race event, featuring the best of the French Riviera. Both offer international athletes the opportunity to compete in a stunning destination race and then holiday with the family on the world-famous Côte d’Azur.”

For further information and entries, open now, for both Ekoï Challenge Fréjus on 14 May and Challenge Cagnes-sur-Mer on 11 June, visit www.challenge-france.com.