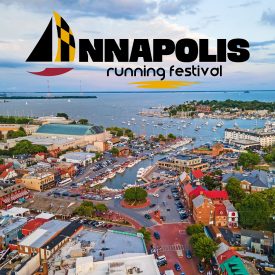 January 12, 2023 /ENDURANCE SPORTSWIRE/ – Corrigan Sports Enterprises is proud to announce that they have reached an agreement with the City of Annapolis and Anne Arundel County to host the 1st annual Annapolis Running Festival to be held on March 11, 2023. “CSE is thrilled to bring our endurance event formula to Annapolis and Anne Arundel County. Past attempts have proven that Maryland’s capital city can be a great host for a long distance running event. This is a brand new event and we intend to create a stable and quality race that everyone involved can be proud of and count on for years to come,” stated Lee Corrigan, President of Corrigan Sports Enterprises.

CSE will be working with a number of local charities in Annapolis and the Anne Arundel County area to raise funds through the event. The featured charity will be the Annapolis Police Foundation, whose mission is to support Annapolis police officers in need and support police outreach in the community. CSE will create the “Charity Chaser” which will feature an Annapolis police officer running in the event. The Annapolis Running Festival will make a donation for every runner that the “Charity Chaser” passes along the course. “On behalf of the Annapolis Police Foundation, we are excited to be involved with the event and look forward to having the “charity chaser” promotion raise some funds for the foundation and shine a light on the good works that our officers and foundation do in the community” said Annapolis Police Foundation Chairman Brian Finan.

Corrigan Sports and their staff of 15 full-time sports marketing and event managers have been producing events for 22 years. CSE, a Maryland based company has deep roots in the state. In addition to working on a number of events in Annapolis, CSE owns and operates well known Maryland endurance events such as: the Bay Bridge Run, the Baltimore Running Festival and the Frederick Running Festival.

Headquartered in Elkridge, Maryland, Corrigan Sports Enterprises has earned its national reputation by owning and operating some of the largest events in the endurance industry. Founded in 2001, CSE owns and/or operates marquee events such as the Baltimore Running Festival, Frederick Running Festival, Baltimore 10-Miler, St Charles Running Festival, The Bay Bridge Run and the All-America Lacrosse Classic. For more information visit: www.corrigansports.com or call 410-605-9381.

About The Annapolis Police Foundation

The mission of the Annapolis Police Foundation is to assist the community of Annapolis, Maryland by raising charitable funds to support the Annapolis Police Department in increasing the capacity and improving the effectiveness of police programs and community outreach activities.. For more information visit: www.annapolispolicefoundation.org or contact Judy Buddnesick at judyb@francesmarketing.com or 443-994-2511.

View all Releases by Corrigan Sports