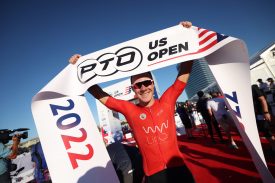 With US Olympic legend and Dallas native Michael Johnson watching on – and temperatures touching 95°F and 51% humidity – Chartier powered past compatriot Sam Long on the penultimate run lap to claim his first major race win and a prize cheque of $100,000.

“I believed I had a chance of winning today. Like I knew if the fatigue kind of settled down…if it was all good, I knew I could win today,” said an ecstatic Chartier.

Asked how he felt during the race, the 28-year-old from Monterrey, California, responded:

“Yeah, it felt really relaxed. I was really focussed. You know, you could see here I typically have a watch, it fell off in the swim, so I was blind for pacing. I really honed in on how I felt. I was like, patience, patience. Just relax. And then that last lap, like, boom, had to go. And I had the energy because I just had patience all day.”

In the post-race TV interview, Chartier quipped to Johnson: “I’m still not as fast as you.”

To which Johnson replied: “I know, but you look good doing it. That’s what’s important. Whatever it takes to win.”

Second place went to Denmark’s Magnus Ditlev. Asked whether he enjoyed it, the PTO World #3, who was seeded #1 for this race, said:

“Yeah. At moments but sometimes it was really getting to me with the heat, but otherwise I think it was a really fun race. It was fun, dynamic racing; especially on the bike with Sam and I attacking the course and then on the run course I felt in control and was able to take Sam in the last 200 metres. So it was a really fun dynamic for me today actually feeling that I’m racing and not just trying to survive.”

Third place went to another American, Sam Long, who for a long time looked as though he was going to claim his first PTO race win. After taking the lead on the bike, the 26-year old PTO World #11 from Boulder, was leading until lap 4 of 5 in the run.

“It’s a little bittersweet getting third in the end. But yeah, I did the best I could. I mean, I took a lot of risks on the bike. I had to bridge way up. I used that to my strength. And then on the run I was warm, but I wasn’t too hot. It was kind of more muscular. And at the end of the day, I did the best I could and we got two Americans on the podium. And in Dallas, that’s incredible. And yo, yo, yo, thanks for all the fans.”

HOW THE RACE PLAYED OUT

Aaron Royle was first out of the water in 26:38, bringing along a string of strong swimmers including Sam Laidlow, Ben Kanute and Daniel Baekkegard. Meanwhile, Magnus Ditlev was 1:10 back in 29th place with Lionel Sanders (36th) 2:37 back, just ahead of Sam Long.

Kanute was first onto the 80km bike course and was clearly keen to push the pace with Laidlow and Royle the first to react. Meanwhile Sanders and Long quickly set about powering through the field.

By the end of lap one, Sam Laidlow was leading the front pack, a long train of 13 athletes including Kanute, Florian Angert, Baekkegard and Kyle Smith. During lap two, Laidlow put in a dig to create an advantage, Angert the only athlete to respond. The pair had a 20-second lead by the lap’s conclusion, while Sam Long was now 1:56 back.

With 40km behind them, Laidlow and Angert had a 1:17 lead on the rest. Long, now ahead of Ditlev and Sanders, was 1:37 from the lead. Just 10km later, Long had bridged to the chase pack, going right to the front and into third place.

Up front, Angert surged ahead of Laidlow and with 20km to go, had a 30-second lead to the Frenchman and 1:03 to Long. In the final lap, with 8.2km to go, Long passed Laidlow too, Ditlev going with the American along with Collin Chartier, 1:05 behind Angert.

As Angert entered T2, the German had a lead of 59 seconds, which was cut to 41 by a fast transition from Long with Ditlev 57 seconds down, closely followed by Chartier and Laidlow.

Within the first lap, Long had taken pole position and Ditlev soon followed. However, it was Chartier who was running fastest, the American making it into a podium position around 6km in. While Long was holding Ditlev at around 15 seconds, nothing could defuse Chartier’s inexorable pace. Patiently chipping away at the seconds, the rising USA star caught the Dane at around 10.5km, showing no sign of wilting in the savage Texan heat.

At 12.5km, Chartier was on Long’s shoulder and while the latter tried to hold onto his countryman as he was passed, the elastic soon extended and snapped, putting Chartier on track for the biggest win of his career.

While the top of the podium looked set, Ditlev was now advancing on Long. The tall Dane stalked the American with his distinctive loping running style and managed to overhaul the Long in the last 1500m to break the US one-two.

Laidlow equalled his finish at the PTO Canadian Open, coming fourth again to take away $40,000, while Florian Angert, so instrumental in the race dynamics, rounded out the top five to claim $35,000.

“That was another amazing day’s racing. Following the women’s lead yesterday, the men stepped up and defied the heat to produce a thrilling day’s racing. And to have two home athletes on the podium was a fitting conclusion for all the fans that had come out to cheer them on.”

Catch the action again with the full race replay on PTO+

About the Professional Triathletes Organisation

The PTO is a new body co-owned by the professional triathletes, united in their desire to take the sport of triathlon to the next level. The inaugural PTO Tour race schedule for 2022 included: the first-ever PTO Canadian Open (July 23-24); the second edition of $1.5M Ryder Cup-style Collins Cup (August 20), which sees Team Europe take on Team USA and Team International; and the first PTO US Open (September 17-18). Each Open carried a minimum prize money of $1M and was raced over 100km (2km swim, 80km bike and 18km run). In 2023 and 2024, the PTO Tour plans to expand with the PTO European Open and the PTO Asian Open, alongside their US and Canadian equivalents and the Collins Cup.