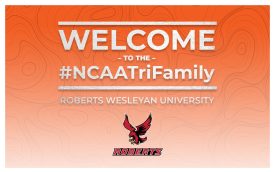 “It’s an exciting time to be a Redhawk, and this expansion of our competitive teams provides a more robust athletics program. For 157 years Roberts Wesleyan University has been committed to education for character, and our athletic programs provide opportunities for students to become the best they can be on and off the field,” said President Deana L. Porterfield. “As an NCAA Division II university, we are committed to the development of the student-athlete, which pairs academic excellence with excellence in competition. At Roberts we go one step further, integrating faith in all that we do. Our students excel academically across all disciplines and serve the community out of a call to transform society. This is the Roberts difference.”

The commitment by Roberts Wesleyan University continues the momentum women’s collegiate triathlon has gathered toward becoming an NCAA Championship sport. With more than 40 schools now offering women’s collegiate triathlon, the NCAA Emerging Sport for Women just has a few more steps to take on its way to being fully managed by the NCAA as a championship event, including committee, council, divisional and budget approvals.

The 2022 season came to a close this past weekend in Tempe, Arizona, at the 2022 Women’s Collegiate Triathlon National Championships where varsity student-athletes from 32 collegiate programs competed for national titles in DI, DII and DIII. Athletes compete in draft-legal races that are sprint-distance, featuring a 750-meter open-water swim, draft-legal 20-kilometer bike and 5k run.

For more information about triathlon as an NCAA Emerging Sport for Women, visit usatriathlon.org/ncaa.

Interested in helping to identify and recruit the next women’s varsity collegiate triathlon program? Inquiries may be directed to Tim Yount, USA Triathlon Chief Sport Development Officer, at tim.yount@usatriathlon.org.

Roberts Wesleyan University is committed to character development, Christ-centered education, transformational learning and service. With 1,579 students and a tradition of excellence since 1866, the university strives to inspire students to transform themselves and the world, and offers over 90 undergraduate, graduate and adult-degree completion programs taught by high-quality, supportive faculty. Roberts Wesleyan University also has two doctoral programs in clinical/school psychology and occupational therapy. Redhawks Athletics intercollegiate sports teams compete as members of NCAA Division II. For more information, visit roberts.edu/about.

USA Triathlon is proud to serve as the National Governing Body for triathlon, as well as duathlon, aquathlon, aquabike, winter triathlon, off-road triathlon, paratriathlon, and indoor and virtual multisport events in the United States. Founded in 1982, USA Triathlon sanctions more than 4,000 races and connects with more than 400,000 members each year, making it the largest multisport organization in the world. In addition to its work at the grassroots level with athletes, coaches, and race directors — as well as the USA Triathlon Foundation — USA Triathlon provides leadership and support to elite athletes competing at international events, including World Triathlon Championships, Pan American Games and the Olympic and Paralympic Games. USA Triathlon is a proud member of World Triathlon and the United States Olympic & Paralympic Committee (USOPC).