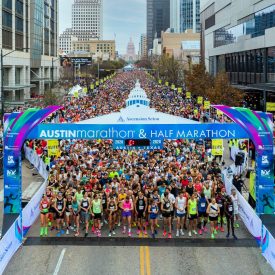 Devon Lévesque will chase down runners in the official philanthropic program

Devon Lévesque is a 30-year-old serial entrepreneur, philanthropist, and fitness enthusiast. He is the founder of two companies; The DML Group, which invests in growth stage health and wellness companies and Creator & Company, a growth marketing firm helping selected brands build community. Aside from his business ventures, Devon lists mental and physical health as a top priority. He bear crawled a marathon in 2020 in 20 hours and 48 minutes to not only set a world record but raise capital for suicide awareness and mental health. Aside from training as the Charity Chaser, Devon is also in the middle of his other purpose driven challenge by summiting the highest point on every continent in the world

“We’re excited to have Devon as the Austin Marathon Charity Chaser,” said Jack Murray, co-owner of High Five Events. “The positive impact he’ll have means Austin Marathon Gives will continue to raise its profile to better serve Central Texas nonprofits and the selected charities can raise more funds to better serve our community.”

Devon is in good company in this role; former Charity Chasers include Lance Armstrong; Sportscaster, Ricky Doyle; Meteorologist, Chikage Windler. The charity chaser starts the event after the final starter crosses the start line of the Austin Marathon & Half Marathon, at approximately 7:25 AM. They will then try to catch as many marathon runners as possible. There will be approximately 4,000 marathon runners. For the 2023 edition, Devon is expected to catch all but about 50 of the marathon runners if he hits his goal of 3:00 hours.

About the Ascension Seton Austin Marathon®: The Austin Marathon® will celebrate its 31st year running in Austin on Feb. 19, 2023. Austin’s flagship running event annually attracts runners from all 50 states and 30+ countries around the world. With start and finish locations just a few blocks apart, and within walking distance of many downtown hotels and restaurants, the Austin Marathon is the perfect running weekend destination. 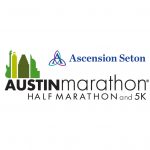