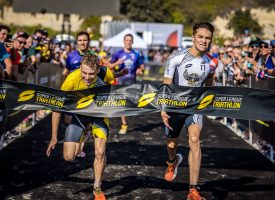 /ENDURANCE SPORTSWIRE/ – Four former champions and an Olympic gold medallist are among the first wave of athletes confirmed for the Arena Games Triathlon powered by Zwift.

There are two monumental clashes in the offing as Jess Learmonth, the first ever Arena Games winner, and fellow Brit Beth Potter, who took the title in London in 2021, go head-to-head in the women’s field.

In addition, German favourites Justus Nieschlag, another former Arena Games winner, and Anabel Knoll will kick-off proceedings in style in front of their home fans in Munich on April 9. The series then visits London (April 23) before the Grand Final in Singapore (May 7).

Arena Games Triathlon (AGT) powered by Zwift is a trailblazing concept pioneered by Super League Triathlon, which in 2022 will grow further thanks to a partnership with World Triathlon.

The real-life and virtual reality blended racing provides an immersive viewing experience that allows fans to get up close and personal with the best triathletes in the world without leaving the comfort of their seat. The event also gives esport fans, and lovers of sports statistics, the chance to enjoy live data from the athletes in real time, with fans able to come along and spectate for the first time in 2022.

The all-new Arena Games Triathlon World Championship Series powered by Zwift will contribute points to the World Triathlon rankings, and the athletes who collect the most points will be awarded the first-ever triathlon esport World Titles in Singapore.

The full start lists will be announced in the week before each event.