Cannes rolled out the red carpet for GFNY 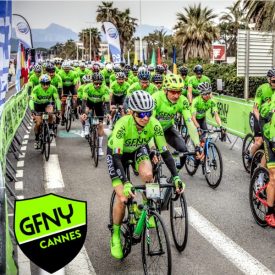 NEW YORK CITY, March 29, 2022/ENDURANCE SPORTSWIRE/ – GFNY Cannes was the first of six GFNYs in France in 2022. Racers tackled 111 km with 2013m of climbing from the glitzy coast of Cannes, through the curvy and hilly hinterland roads with two important climbs and back to the coast.

Shortly after the start, Col du Tanneron with its 7.5km of climbing was raced hard and led to a first significant reduction of the contenders. After the descent, Belgian Olivier Godfroid attacked and quickly built a gap that was never closed again by his competitors. At the bottom of Col d’Avaye with its 13.7km climbing, Godfroid had a 1 min. lead. He extended it to almost 3 min. despite the organised attempts of a 10-man group behind him and despite a significant headwind.

Meanwhile there was controversy in the women’s race: while Italian Annalisa Prato took the win convincingly, second finisher Canadian Simone Boilard was later disqualified from the race for outside assistance. Race footage showed that her boyfriend and pro cyclist rode with her for lots of the race, yet wasn’t a registered rider. Hence, second place went to Barbara Fonseca and third to Cathelin Ramonet (both France).

“It was brilliant to open the bike racing season under the warming spring sun of the Côte d’Azur,” says GFNY CEO Uli Fluhme. “And doing so in spectacular Cannes with a GFNY was a dream come true for us. At the finish, the red carpet was rolled out for our riders. GFNY Cannes will no doubt be back in March 2023!”

Next up on the GFNY calendar is GFNY Peru on April 10. Riders tackle the world’s highest road cycling race in the Andes of historic Cusco.

30 plus events around the world. View the 2022 calendar here

The 10th annual GFNY World Championship New York will be held on May 15, 2022. The race features the world’s most international peloton with riders from over 90 countries. Athletes take on a challenging 100-mile route from NYC to Bear Mountain to Fort Lee to compete against each other, the clock and themselves in a personal endurance challenge.