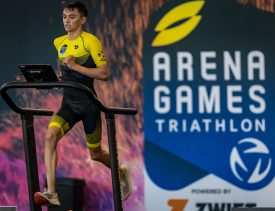 Some 1,700 fans are set to cheer home heroes Alex Yee, Georgia Taylor-Brown and Jessica Learmonth as they aim to take a step towards being crowned triathlon’s first ever esports World Champions.

Also in action are the winners of the first event of the Series in Munich, Beth Potter and Aurelien Rapahel. With the eventual champions recording points from their best finish from Munich or London and the Grand Final in Singapore (May 7), there is much on the line at Queen Elizabeth Olympic Park.

Another athlete set to compete is Petra Kurikova, the Czech star who made headlines around the world after she was disqualified in the heats in Munich for spitting.

Learmonth won the first Arena Games event in Rotterdam in 2020 and will be a force to be reckoned with as she makes her return in London.

She said of Arena Games Triathlon: “At first, I thought ‘surely not, how is that going to be entertaining for people?’  When we got there, I couldn’t believe it, because it was Covid as well. When you imagine how good it was and then you think what if there were actually crowds there?

“They (Super League Triathlon) made the spectacle so good. I just thought ‘this is brilliant’. How good is it that it is all in one place. I think it was brilliant and I am really excited to see what it will be like with the crowds.”

Arena Games Triathlon powered by Zwift is a trailblazing concept pioneered by Super League Triathlon. The real-life and virtual reality blended racing provides an immersive viewing experience that allows fans to get up close and personal with the best triathletes in the world without leaving the comfort of their seat. The event also gives esport fans, and lovers of sports statistics, the chance to enjoy live data from the athletes in real time.

Another new development in London will be the removal of drafting for the bike legs in Zwift, which will force athletes to decide whether to sit back or try to attack to gain an advantage over their rivals.

Full details on how to watch Arena Games Triathlon London powered by Zwift can be found on the Super League Triathlon website.