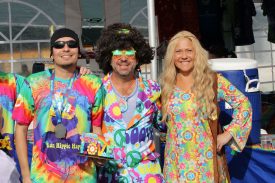 LAS VEGAS, NEVADA – November 11, 2022 /ENDURANCE SPORTSWIRE/ – Beyond Limits Running today announced for the first time ever a blind runner has outright won one of its races. Carlos Terrazas won the 10K division at the 4th Annual Happy Hippie Harvest Run held on November 5, 2022 at the non-profit Gilcrease Orchard in Las Vegas, Nevada.

Stephanie and Ken Rubeli, co-founders of Beyond Limits Running and co-race directors of the Happy Hippie Harvest Run commented, “For over a decade we have watched 1,000’s of runners overcome life challenges through the magic of running. Watching Carlos, with the help of his running guide Donald Bowman, take first in the 10K is a memory we will cherish forever. As a fellow blind runner mentioned at the race, his win was a win for the entire blind community. We look forward to again hosting the growing community of Southern Nevada blind runners at our future events.”

Carlos Terrazas commented, “When I entered the Hippie 10K race, I wasn’t looking to win. I just wanted to push hard and see how fast I could run. A month leading up to the race, I pushed myself as much as I could during my running routines to see how much I could improve from my previous race. Hearing my name called as the winner among a large field of competitors was surreal and rewarding. This is proof positive that with hard work and focus, anyone can achieve their goals and break expectations regardless of disability or health condition. Hopefully my win can inspire more people to take a chance on themselves, push beyond their limits, and achieve great things for themselves once thought not possible.”

About Beyond Limits Running:

Co-founded 11 years ago by Stephanie Rubeli, a double organ transplant recipient and her husband, Ken Rubeli, Beyond Limits Running (“BLR”) was formed to help runners of all abilities run way past their perceived limits by competing in running events. Stephanie and Ken are very active participants in the non-profit community. Ken is a former casino executive and retired CEO of Boys & Girls Clubs of Southern Nevada. Currently, he serves as board president of Las Vegas-based Andson Foundation and is a Boys & Girls Club of Southern Nevada Foundation trustee. Stephanie is a co-founder and board president of Phoenix-based Mindful Youth Foundation. Known for its over-the-top festive events, BLR produces the Beyond Limits Ultra Race, the Happy Hippie Harvest Run and the Bee-utiful Sunflower Run. BLR recently sold its nationally recognized Jackpot Ultra Running Festival to Aravaipa Running. Learn more at www.BeyondLimitsRunning.com.