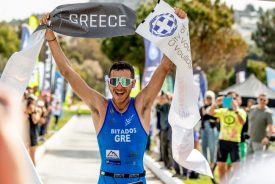 The win marked a successful title defense for Bitados, who at this very race six months ago became the first Greek elite to win an XTERRA major. He’s just 18-years-old. For Paties (FRA), the victory is her second big win on the World Tour and first since taking the XTERRA Nouvelle-Aquitaine crown in 2020.

Bitados posted the fastest bike split of those in the lead pack, then blitzed the run with a days’ best 38:20 to take the tape nearly two-minutes ahead of Chane, the runner-up.

“Really happy to get the win against so many good athletes,” said Bitados (pictured above ahead of Bonacini and Spinazze). “The swim was smooth, on the bike I was able to be up front with the Italians, and on the run I just did my best to go fast.”

Chane (pictured below), who said he was delighted with the new mountain bike course at XTERRA Greece, was quick to praise Bitados, saying, “Panagiotis was strong all day, it was an impressive performance from him.”

Bonacina finished third, edging Richard Murray by just 14 seconds, and Theo Dupras – who had the fastest bike split of the day (1:21:20) – finished fifth.

In the women’s elite race Rachel Klamer (NED) had the fastest swim in 20:27, which was more than one-minute quicker than Lucia Vergara (ESP) and roughly three-minutes ahead of XTERRA specialists Loanne Duvoisin (SUI), Sandra Mairhofer (ITA), and Paties.

The mountain bike portion was a whole other story, with Paties posting the best bike split in 1:37:37, more than seven-minutes better than Klamer (pictured below).

“When I started riding I was nervous because I crashed yesterday, and some parts of the course are quite tricky,” said Klamer, who was fourth at the Tokyo Olympics. “I was actually surprised I was able to hang on for so long. I pushed hard on the uphill’s and was able to gain time there, but then I’d lose it on the downhills and technical sections.”

Klamer came into T2 in fourth, left T2 in third, then turned in the fastest run of the day (45:25) to finish in second place a little more than two minutes behind Paties.

“The hills on the run were tough because I’m not used it, but I loved it, enjoyed this entire day more than I thought would,” said Klamer.

For Paties (pictured above), a lot of hard work in the off-season proved beneficial today.

“I’m so happy, this is unbelievable to be able to race with the top girls today,” she said. “I didn’t have a great swim, was out of the water in fifth, but I was riding well and after the first loop I saw Rachel and from there I just did my race. I loved the tracks, nice and rocky, and the run was hard. To be out there with the lead, I knew I had a chance to win so gave it everything. Last year was difficult for me, so this win was really good for my confidence.”

“That was the best I could’ve done, so very happy,” she said. “I had a good swim, did my best on the bike, it was very technical and suited me well, and the run was hell, but I just tried to stay on.”