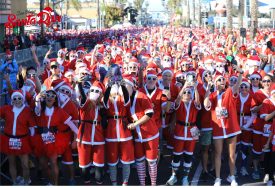 SDRC is a staple of the San Diego running community, offering a number of races throughout the year including the San Diego Resolution Run, San Diego Leprechaun Run, America’s Finest Corporate Dash 5K, the Balboa Park 8-Miler hosted by the San Diego Track Club, and the Pacific Beach Half Marathon & 5K.

“For the 10th year of the Santa Run, we turned to BibRave to help us manage our social media and email marketing for this event,” said Eric Marenburg, Chief Running Officer and Co-Founder of the San Diego Running Company. “BibRave helped us reach sell-out numbers and bring a record number of Santas to the streets of Pacific Beach. They were also critical in taking marketing elements off of our plates so that we could focus on building a great event.”

“San Diego Running Company consistently brings their participants a stellar lineup of running events,” said Andy Wallace, V.P. of Programs & Partnerships at BibRave. “We’re thrilled to partner with them to help them reach a record number of registrations for the Santa Run as well as several of their other events in 2022.”

The San Diego Santa Run was held on December 10, 2022 in San Diego, California. The event was a smashing success, selling out even in a year of tumultuous and tentative race registrations.

BibRave is a marketing agency that specializes in fitness and endurance sports. With 10 years’ experience building and managing ambassador communities for large and small companies, BibRave brings a team of social media, creative, and online community-focused experts.

Lastly, BibRave has its own large network of social media influencers called the BibRave Ambassadors, which it leverages to drive more race registrations and product sales for the company’s event and brand partners.