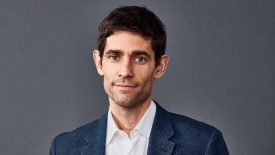 Nicholas Thompson, CEO of The Atlantic, is one of the country’s top trending thinkers and a ranked master’s marathoner

DENVER (Dec. 26, 2022) /ENDURANCE SPORTSWIRE/ – Running USA is thrilled to announce that Nicholas Thompson, CEO of one of the nation’s leading magazines and a talented master’s marathoner, will be a keynote speaker at the 2023 Running USA Industry Conference presented by Race Roster.

Thompson is the CEO of The Atlantic, a position he has held since February 2021. In 2022, The Atlantic earned the top honor for magazines, General Excellence, at the National Magazine Awards; earned its second Pulitzer Prize in as many years; and was named Digiday’s Publisher of the Year. He was previously the editor-in-chief of WIRED. Under his leadership, WIRED broke major and much-lauded stories about Facebook, cyber-warfare, politics, and numerous other topics; Thompson also wrote a widely-celebrated piece about his running, “To Run My Best Marathon at Age 44, I Had to Outrun My Past.”

He is an avid runner, and in 2019 he finished the Chicago Marathon with a time of 2:29. In 2021, he set the American record for men 45+ in the 50k race. In 2022, he was the top American at the Masters World Championship race within the London Marathon.

Thompson will focus on thought-provoking lessons from intense running that are most applicable to the rest of our lives in his Denver keynote. “The lessons from running are often the lessons for life, though sometimes they’re not easy to see,” said Thompson. “I’m thrilled to have the chance to discuss this beautiful sport with the people who make it happen.”

“It’s a great pleasure to welcome Nicholas Thompson to the stage at the 2023 Industry Conference,” said Christine Bowen, COO of Running USA. “His perspective on running, both as a high-level competitor and cultural observer, will be very insightful for our attendees.”

Before becoming editor in chief of Wired, Thompson served as the editor of NewYorker.com from 2012 to 2017, where he oversaw and managed the magazine’s fast-growing website. During that time, the number of monthly readers increased seven-fold. Thompson is also a former contributor to CBS News, where he discussed technology on CBS This Morning and the CBS Evening News. He is also a co-founder of The Atavist, a software company and National Magazine Award-winning digital publication that was acquired by WordPress in 2018. Prior to that he was an editor at Wired who assigned the story that became the Academy Award winning film Argo. His book, “The Hawk and the Dove: Paul Nitze, George Kennan, and the History of the Cold War,” was published in 2009 and hailed as “brilliant” by The Washington Post. The Washington Times said it “may be the most important political biography in recent memory.”

Register for the 2023 Industry Conference today and view the event agenda.

About the Industry Conference

Since its origins as a small gathering of Running USA’s founders in Southern California in 2004, the Running USA Industry Conference presented by Race Roster has grown to becoming the best-attended, most esteemed gathering of running industry professionals from around the USA and the world. Now moving locations each year, the conference has been held in Los Angeles, San Diego, Savannah, Houston, San Antonio, Orlando, New Orleans, Puerto Rico, Las Vegas and heads to Denver for the 2023 event.

Running USA is a non-profit organization committed to the growth and success of the running industry. Our promise is to deliver quality education, exceptional industry content, valuable research and ample networking opportunities. We connect. We support. We educate. Running USA brings together an entire community. As the voice of endurance running, we’re all about connection and collaboration. Whether we’re connecting race organizers with sponsors, partners and athletes, or connecting our members with vital information and best practices, our goal is to raise the profile of running and help more people get more out of it. For more information, visit runningusa.org

View all Releases by RunningUSA