Australian champions are ready for One Water Race 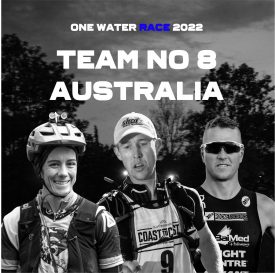 /ENDURANCE SPORTSWIRE/ – Australia’s top adventure racing profiles are now ready for One Water Race, the world’s toughest endurance race, 23-25 August 2022. Team No 8, Australia is a team with some of the world’s best endurance racers with highly respected merits in all disciplines. Rob Preston, Elizabeth Dornom and Ben Allen are professional athletes who puts the greatest pressure on its competitors and takes One Water Race to the highest level of competition.

The first official One Water Race, August 23-25, 2022, a new concept that strives to establish the world’s toughest endurance race. The racers will face one of humanity’s toughest challenges, over land and sea, 250 km, Stockholm Archipelago, Sweden. A new era in endurance racing and climate activation – all for the benefit of our world waters and the award of $100,000 in prize money.

– We are honored to have this team, it’s a respectful participation that takes the race to the highest professional level. However, the challenge is unique and it will be interesting to see how they can master the terrain and conditions in the Stockholm archipelago, says Thomas Ogander.

One Water Race is a concept created to be the ultimate proof of human capacity, through a unique combination of adventure racing, orienteering, swimrun, ultramarathon and the distance and combination of running, swimming and navigation. One Water Race is a professional race and created for the best endurance racers in the world. A level required to meet the extreme challenge, 250 kilometers from Arholma in the north to Landsort in the south, a distance of 6 marathons running and swimming. Nonstop.

One Water Race is adapted for a maximum of 10 teams, each team consists of 3 racers and a team captain, with both sexes needing to be represented and be out on the course the entire time. One Water Race wants to reward the racers for the extreme effort required with one of the highest prize money in endurance racing, $ 100,000.

The admissions process is tough and it is of the utmost importance to ensure that participating teams have the required capacity. The draft continues and Thomas Ogander can present the eighth team in One Water Race 2022 – Team No 8, Australia. A team of Australia’s premier endurance racers and the highest professional level in all disciplines. The team has impressive merits from Eco Challenge, World XTERRA Championship, Adventure Racing World Championship, World Rogaining Championship and Ironman World Championship.

– This is an impressive team with an experience and strength that few can match and that takes the competition to the absolute highest level. The team also adds a professionalism and a standard that inspire both us as an organizer and the other teams, says Thomas Ogander.

– It’s been a long time since I’ve felt daunted by the huge challenge of an event like One Water Race. Competing against teams from around the world in a new event format is the type of challenge I’ve always been looking for. Our goal is to prove that we have the background to not only finish the race, but to excel in it, says Rob Preston.