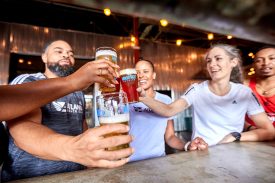 All registrants get complimentary pint through April 1

ATLANTA – MARCH 16, 2022 /ENDURANCE SPORTSWIRE/ – The race may be on a Monday morning, but runners, walkers and volunteers at this year’s Atlanta Journal-Constitution Peachtree Road Race will celebrate with Monday Night Brewing. Atlanta Track Club announced Atlanta-based craft brewery Monday Night Brewing as the official beer partner of the Peachtree, which will take place Monday, July 4, 2022. Monday Night Brewing will sample its wide-range of craft beers at the Peachtree Health and Fitness Expo presented by Publix on July 2 and 3. Then, the brewery will provide beer to Atlanta Track Club members and finishers over the age of 21 at the post-race member party at Park Tavern in Piedmont Park after the race.

“Monday Night Brewing is invested in the Atlanta community,” said Rich Kenah, Atlanta Track Club’s CEO and Race Director of the Peachtree. “At the Peachtree, the community comes together to celebrate Running City USA, celebrate diversity and celebrate each other. There’s no better way to do that than with fellow runners over a locally-made, craft beer.”

Monday Night will feature its lineup of world-class craft beers like Blind Pirate IPA, Doctor Robot, Drafty Kilt, Slap Fight, and Space Lettuce at the Expo and the Race, and will introduce runners and walkers to Lay Low IPA. According to  Monday Night’s Brewmaster Peter Kiley, this 90-calorie, low-ABV IPA is the ideal post-workout refreshment. For those seeking a bolder option, Kiley recommends Blind Pirate IPA—a 7.4% ABV, expertly engineered offering from the brewery, with complex citrus flavors and brewed with advanced hop products.

“We are incredibly excited to partner with Atlanta Track Club on perhaps the most quintessential Atlanta event, the Peachtree. We have been deeply involved with the running community since we started Monday Night, and are looking forward to offering runners and walkers a variety of delicious, locally-made craft beers before, during and after race day,” said Monday Night Brewing’s CEO, Jeff Heck.

Registration for the Atlanta Journal-Constitution Peachtree Road Race is open now through March 31 at ajc.com/peachtree. Anyone of legal drinking age who registers for the race can bring proof of registration to Monday Night Brewing’s West Midtown location on Trabert Avenue or Monday Night Garage in the Lee & White development and receive one free pint of locally-made craft beer through April 1, 2022. Atlanta Track Club will have onsite registration as well as Peachtree-themed giveaways at its free group run/walk with Atlanta BeltLine Partnership at Monday Night Garage on Thursday, March 24 at 6:30 p.m.