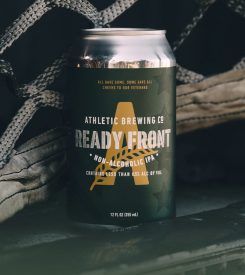 Developed with a team of veterans and using the “Veterans Blend” of five different Pacific Northwest-grown hops from Yakima Chief Hops, Ready Front IPA contains 60 calories and is the perfect brew to salute those who served.

In honor of Veterans Day, Athletic Brewing will donate 100% of profits from Ready Front to Catch A Lift and Team RWB – two non-profits dedicated to serving veterans. Meanwhile, Yakima Chief Hops is donating up to $3 per pound from the sale of its Veterans Blend to the HunterSeven Foundation, an organization specializing in medical research and education specifically on the post 9/11 veteran cohort.

Additionally, throughout the month of November, Athletic Brewing is offering 15% off all products to customers with military status verified through ID.me, including active duty service members, reserves, veterans, spouses, and families.

Now in its third year, Ready Front IPA is an important tradition for Athletic Brewing. Several Athletic team members and ambassadors are a part of the military community.

“We want to thank our veterans for protecting the many freedoms we enjoy every day,” said Athletic co-founder and CEO Bill Shufelt. “We understand the sacrifices our U.S. military members make to serve our country. I’m proud that we’re able to give back to veteran communities, and am honored to toast our troops with this brew.”

“It’s important for veterans to have support in creating a balanced life post-service,” she said. “Athletic fosters that support through the strong community they’ve created and through the mission behind their non-alcoholic beers.”

Athletic Brewing, founded in 2017 by Bill Shufelt and John Walker, is America’s leading producer of non-alcoholic craft beer. In 2022, Athletic was ranked as the 26th fastest-growing private company in America by Inc. Magazine and named to TIME’s “100 Most Influential Companies” list. Athletic was also selected as one of Ad Age’s Top 20 Hottest Brands of 2022, named to Fortune’s 2022 Change the World list, and featured on Fast Company’s “Brands That Matter” list in 2021. The company has won over five dozen prestigious brewing awards, including Gold & Silver for its Run Wild and Free Wave IPAs in the 2022 US Open of Beer Championships. Athletic has custom breweries on the east and west coasts, and its “Two for the Trails” initiative donates 2% of all sales to trail and park cleanups and maintenance. Plus, as a part of its IMPACT Program, 1% of revenue goes to non-profit organizations that support positive impact and opportunity from the ground up. As of 2022, Athletic Brewing is proudly a Certified B Corporation™. Its full-flavored non-alcoholic brews and hop-infused sparkling waters are available for purchase on www.athleticbrewing.com.

View all Releases by OutsidePR