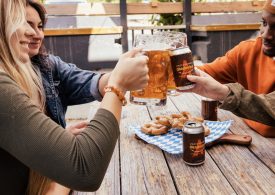 MILFORD, Conn. and SAN DIEGO (September 14, 2022)/ENDURANCE SPORTSWIRE/ – Athletic Brewing Company, the leading non-alcoholic craft brewer in the U.S., today announced the return of its beloved Oktoberfest Non-Alcoholic Festbier for a fourth year. As the seasons change and fall festivities return, Athletic Oktoberfest pairs perfectly with all of your autumn activities – from tailgate parties to leaf-peeping adventures.

“We pride ourselves on creating non-alcoholic beverages that everyone can enjoy at all times, especially during the holidays and when spending time with those closest,” said Bill Shufelt, Athletic Brewing co-founder and CEO. “Our team looks forward to bringing this offering back each fall, and we love seeing that more drinkers want to enjoy these seasonal flavors without the alcohol.”

Beginning September 14, fans can get their hands on this seasonal staple at select retail locations across all 50 states and at athleticbrewing.com. To locate a retailer in your area, visit athleticbrewing.com/where-to-find-us, and make sure to follow Athletic Brewing on Facebook, Instagram, Twitter, and YouTube to stay up-to-date on all things Athletic.

Athletic Brewing, founded in 2017 by Bill Shufelt and John Walker, is America’s leading producer of non-alcoholic craft beer. In 2022, Athletic was ranked as the 26th fast-growing private company in America by Inc. Magazine and named to TIME’s “100 Most Influential Companies” list. Athletic was also selected as one of Ad Age’s Top 20 Hottest Brands of 2022 and featured on Fast Company’s “Brands That Matter” list in 2021. The company has won over five dozen international brewing awards, including Gold & Silver for its Run Wild and Free Wave IPAs in the 2022 US Open of Beer Championships. Athletic has custom breweries on the east and west coasts, and its “Two for the Trails” initiative donates 2% of all sales to trail and park cleanups and maintenance. Plus, as a part of its IMPACT Program, 1% of revenue goes to non-profit organizations that support positive impact and opportunity from the ground up. As of 2022, Athletic Brewing is proudly a Certified B Corporation™. Its full-flavored non-alcoholic brews and hop-infused sparkling waters are available for purchase on www.athleticbrewing.com.

View all Releases by OutsidePR