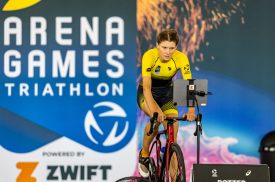 Super League Triathlon’s innovative hybrid race format, which this year was held in partnership with World Triathlon to crown the sport’s first esports world champions, was handed the Outstanding Production Achievement – Innovation trophy at the glittering ceremony in Amsterdam.

SLT’s production partners, Aurora Media Worldwide, were behind the production of the events, which have won a string of industry awards for their groundbreaking mixture of real life and virtual racing via Zwift.

SVG Europe editorial director, and chair of the judges, George Bevir said: “Congratulations to all the winners and everyone who was shortlisted. They should all be rightly proud of their achievements. The jury’s choices reflect the best of sports television in Europe but also highlight the incredible work that the industry continues to do. Long may it continue.”