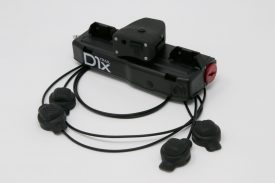 Scotts Valley, California (February 1, 2022) — ARCHER Components’ proven wireless electronic system continues to shift the paradigm of electronic components, adding a universal drop-bar remote for gravel or road bikes, preferably with a 1x drivetrain, to their existing MTB and brake-specific gravel systems. Their new Multi Function Remote (MFR) line of drop-bar offerings means the D1x electronic shifting conversion systems can now work on all three of the major bike categories and offers a ripe opportunity for bike hackers to build their own remotes.

Since 2015 Archer Components has been at the forefront of wireless electronic shifting, developing systems that work with virtually any brands’ rear derailleur, chain, and cog from 2-20 speeds. They released the fully-integrated DBR remote for bikes outfitted with the TRP Hylex RS brake levers. But with the ongoing boom in gravel bikes worldwide, they added the MFR to drastically increase its drop-bar-compatible options to any that use a 1x drivetrain – while that consists predominantly of gravel bikes, some road bikes also run 1x and are compatible, as are recumbents and even handcycles and other adaptive cycles.

With all of its remote options, Archer utilizes the existing chainstay-mounted D1x shifter unit, which connects wirelessly with a remote to drive a shortened rear derailleur cable forward and backward, thus changing gears. The rear shifter unit will also work with 2x or 3x drivetrains but will only shift the rear gears – the front derailleur will still need the original lever/shifter installed.

“In addition to expanding the drivetrain options for gravel bike riders and manufacturers alike, we knew we wanted an option that wasn’t dependent on any other brands. With our MFR we really feel we have something for everyone and every bike,” says Devin Carlson, Archer’s founder. “We’ve said it right from the beginning: Our system will work with everyone; it really does Shift Everything. Electronic shifting has always come at a high price before we came along. We’ve seen great success with our D1x, and we’re confident the new MFR will be equally well received.”

The MFR system includes a choice of satellite button configurations, to be mounted wherever the rider prefers on virtually any handlebar. These fully programmable buttons send shift signals to the remote to shift up or down. Riders can even import their own existing satellite buttons from other brands to work with this system or build their own switches with the help of the Archer Knowledgebase – an online repository of tips and tricks to hack the D1x Trail shifter.

Plus the new MFR offers the same wide range of functions as their mountain bike systems including (but not limited to): easy up and down push-button shifting; on-the-fly micro-adjustability for pinpoint adjustments; Get Me Home’ gear programming; multi-gear shifts; and more. There’s even on-bike charging via a standard micro-USB port in the MFR’s small junction box, which mounts under the stem.

In addition to the clear benefits of wireless e-shifting, and unlike most existing e-shift component groups, Archer’s technology also lets you tune each individual shift point of your rear derailleur to a quarter of a millimeter, so even if you have a bad ring or bent hanger, etc., you can micro-adjust on the fly. Plus, it allows derailleurs to work through their entire range, which is usually greater than the shift levers allow, rather than being confined to the preset parameters – so it’ll most likely allow your ‘10-speed’ derailleur to also work fine with an 11- or even 12-speed cassette.

The full ARCHER Multi Function Remote System starts at $369 for the single strand shift button (2) and the standard batteries, but you can add the Sprint batteries and run a double strand of shift buttons (4) for $429 all versions are available. Everything is included for the quick, simple installation through the Archer mobile app, which can be done in well under an hour.

Archer Components is a small team of riders based in California who design, build, and test intuitive electronic components for every rider no matter what they ride. Their electronic shifting systems can be easily retrofitted to any mechanical drivetrain, so all riders can experience high-performance wireless shifting at a far lower cost. Archer Components: Shift Everything