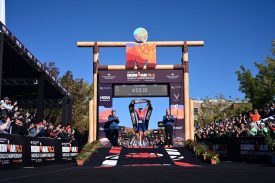 ST. GEORGE, Utah /ENDURANCE SPORTSWIRE/ – In a day that was all about the sport’s top women, Taylor Knibb of the USA overpowered the competition at the 2022 Intermountain Healthcare IRONMAN® 70.3® World Championship presented by Utah Sports Commission. At just 24 years old, Knibb used a 23:54 swim, a 2:14 bike, and a 1:21 half marathon to better her third-place finish from a year ago to secure her first IRONMAN 70.3 World Championship title with an overall time of 4:03:20. After being the youngest women to ever qualify for the US Olympic triathlon team where she earned a silver medal in the mixed relay triathlon in 2021, Knibb now also becomes the youngest female to ever to win the IRONMAN 70.3 World Championship. The Washington, D.C. native also became the first American woman to win the IRONMAN 70.3 World Championship since 2008 when Joanna Zeiger won the crown and just the second American female ever.

“I can’t really believe it. I’m just grateful that I could execute a good swim, bike, and run,” said Knibb. “That last 10km was very, very long, I can’t believe I made it.”

Reigning IRONMAN 70.3 World Champion Lucy Charles-Barclay of Great Britain led the field out on the 1.2-mile swim in Sand Hollow Reservoir with Knibb and Lotte Wilms (NED) trailing shortly behind her.

A solid chase group stocked with talent trailed just 20 seconds back, including Olympic gold medalist Flora Duffy (BMU), and former IRONMAN 70.3 World Champion Holly Lawrence (GBR), in addition to Ellie Salthouse (AUS), Paula Findlay (CAN) and Emma Pallant-Browne (GBR). The top 10 women all knocked out sub-25-minute swim times, starting the bike with a host of athletes that could take the top spot.

Knibb put her mark on the race when she stormed past Lucy Charles-Barclay barely two miles into the bike course. As the miles ticked by, Knibb put more and more time into her three main chasers—Findlay, Charles-Barclay, and Duffy—who took turns trying to break away from the chase group.

Off the bike, Knibb’s victory was all but sealed with a lead of over six minutes. She coasted to a win with a rare buffer of over five minutes on the rest of this world-class field that all fought to the end.

The trio of Charles-Barclay, Findlay, and Duffy was off the bike almost seven minutes back of Knibb, setting the half marathon up as a battle for positions two through five. Into transition 2, Lawrence was back over two minutes from the chase group.

In the early miles of the run, Pallant-Browne, who had the quickest run on the day passed Lawrence for fifth. But it was Findlay who had the legs to break away from the pack and run into a satisfying second place. In the late stages of the run Pallant-Browne passed Charles-Barclay and Duffy in an impressive fight for third. Only three weeks from her second-place finish at the 2022 VinFast IRONMAN World Championship in Kailua-Kona, Hawai`i, Charles-Barclay took fourth, with Duffy rounding out the top five in just her second-ever IRONMAN 70.3 race.

“None of my splits were the fastest splits of the day so it came down to consistency across three,” said Findlay. “It was very cold, but I do think that played to my advantage. I never felt too uncomfortable on the bike, I was always in control, and I kept looking at my watts, and they were high but I felt fine so I kept pushing. I started living for the uphill’s where we could warm up a little bit because it was cold on the descents. I felt great on the run, it doesn’t happen often in my career that I feel like the run is smooth and fluid and it happened today so grateful for that.”

For Pallant-Browne, it was a good swim and a disappointing bike that propelled her to push on the run. “It was tough. I got on the bike and I was so happy with my swim. I could see the girls around me and for me that was probably the best swim I’ve ever had so I thought this could be an OK day,” said Pallant-Browne. “I think I had no expectations. I just wanted to run fast and if I saw people, great but I was just looking at every aid station and just focusing on each aid station instead. If people came, great, but I knew it wouldn’t be easy overtaking them as everyone is going to go into battle and, yeah, it was really tough.”

A replay of today’s women’s professional competition can be viewed on Outside+. The professional men will take on the 2022 Intermountain Healthcare IRONMAN 70.3 World Championship presented by Utah Sports Commission on Saturday, Oct. 29 with live race coverage starting at 7:00 a.m. MT / 9:00 a.m. ET on Outside Watch.

Located in Utah, Idaho, and Nevada, Intermountain Healthcare is a nonprofit system of 25 hospitals, 225 clinics, the Intermountain Medical Group with some 2,700 employed physicians and advanced care practitioners, a health plans division called SelectHealth, Homecare, and other health services. Helping people live the healthiest lives possible, Intermountain is committed to improving community health and is widely recognized as a leader in transforming healthcare by using evidence-based best practices to consistently deliver high-quality outcomes and sustainable costs.

The Utah Sports Commission was created to be a catalyst for Utah in its Olympic legacy efforts and to help enhance Utah’s economy, image, and quality of life through the attraction, promotion, and development of national and international sports. Since the 2002 Olympics and Paralympic, the Utah Sports Commission has attracted nearly 900 major events to the state. The Sports Commission works closely with communities, sports entities, and organizations to provide event services ranging from the bid process, on-site logistics, volunteer coordination, sponsorships and promotional opportunities, and other related services. It is a not-for-profit 501(c)3 business league and Utah Sports Commission Foundation, a not-for-profit 501c3 charitable organization, is governed by an all-volunteer Board of Trustees consisting of statewide sports, business, community, and government leaders. For more information, visit www.utahsportscommission.com and follow us on Twitter, Instagram and Facebook.

In 2006 the inaugural IRONMAN® 70.3® World Championship was held in Clearwater, Florida becoming another test for the world’s elite triathletes. Since that auspicious beginning, the IRONMAN 70.3 World Championship has grown in stature and popularity moving first to Henderson, Nevada in 2011, where athletes encountered a more challenging terrain and then to Mont-Tremblant, Quebec—its first stop on the new “global rotation” for the IRONMAN 70.3 World Championship. The event reached European soil for the first time ever in 2015, with Zell am See, Austria, hosting an epic and memorable event. In 2016, the race moved from the mountains to the beaches of the Sunshine Coast in Queensland, Australia. In 2017, the race returned to the United States, taking place in Chattanooga, Tennessee where it became a two-day event for the first time. In 2018, the event reached the African continent for the first time and was hosted in Nelson Mandela Bay in South Africa. Continuing the rotation, 2019 saw the French Riviera and Nice, France play host to the ever-growing IRONMAN 70.3 World Championship event. After a year in which the event was not able to take place due to a global pandemic, the race returned in 2021 with over 3,500 athletes competing in St. George, Utah. The event will again take place in St. George, Utah, returning to a two-day format on October 28-29, 2022, before shifting to Lahti, Finland on August 26-27, 2023 and Taupō, New Zealand on December 14-15, 2024. Historically, more than 200,000 athletes have participated annually in a series of qualifying races, consisting of over 100 global events. Hosting more than 5,000 athletes from around the world, participants in the IRONMAN 70.3 World Championship have ranged in age from 18 to 85-plus. For more information, visit www.ironman.com/im703-world-championship.