Aid to Ukraine – #RideForUkraine with ROUVY 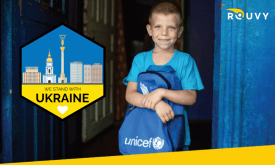 Vimperk, Czech Republic / 25 February 2022 /ENDURANCE SPORTSWIRE/ – The Czech company ROUVY is actively participating in efforts to provide humanitarian aid to people in Ukraine. ROUVY has launched “Ride for Ukraine”, an initiative that can be joined by all users of the ROUVY indoor bike training application. ROUVY will send EUR 1 to UNICEF for every cyclist who completes a short virtual ride near Kyiv.

Both individuals and businesses are endeavoring to alleviate the impact of the acts of war on the Ukrainian population. According to charity organizations, direct financial assistance is the most effective form of aid. Bearing that in mind, the ROUVY team from the South Bohemian town of Vimperk has joined the fundraising effort.

“Our users come from various parts of the world. For every person who takes part in this charity appeal and completes an easy virtual trip around Ukraine’s capital Kiev, we will send EUR 1 to the UNICEF account. We estimate that no less than EUR 25,000 in humanitarian aid will be sent to people in Ukraine. We have tested this form of helping people in need during the COVID-19 pandemic, and ROUVY users showed their willingness to help through sport. The present appeal is distributed to our entire community, which includes approximately 900,000 cyclists around the world. We consider it important to let ROUVY users know our stance regarding the war in Ukraine,” explains ROUVY CEO Petr Samek.

ROUVY’s team includes several employees from various countries, including Ukraine. “The war began with a missile attack that included bombing an airport near my home town, Zhytomyr. Ukraine is now reporting dozens of civilian and military casualties. The attack is a heavy blow to the Ukrainian economy and infrastructure, both of which it will take years to restore, not to mention that it is now impossible to predict how long the conflict will last. My relatives and friends are in Ukraine and they’re fighting for independence. Because of that, I’m grateful to everyone in the Czech Republic for their support,” recounts Yuriy Ryashko, member of the ROUVY marketing team.

ROUVY is a member of Pale Fire Capital, an investment group that has called for support for Ukraine, allocated 1 million USD for instant humanitarian aid, and secured accommodation for 250 refugees.

ROUVY is an app developed by VirtualTraining s.r.o., a company headquartered in the Czech Republic. It is used by the global cycling and triathlon community around the world. It features more than 500 live-action video courses from countries worldwide. With avatars representing cyclists or runners, the app allows the user to cycle and run anywhere around the world in Virtual Reality with friends from the comfort of their homes. ROUVY is an official partner of La Vuelta, Tour de Suisse, Schleck Gran Fondo, and many other cycling events around the world. For more, visit the ROUVY official website at rouvy.com.