After a historic tour that broke the attendance record in many cities, Alianza de Futbol National Finals comes to Phoenix 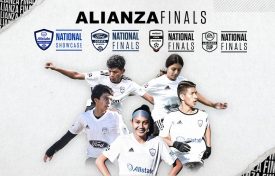 The Alianza de Futbol 2022 tour will come to a close after a week-long National Finals beginning on November 5 and ending on November 10. The event will be held at Bell Bank Park in Phoenix

/ENDURANCE SPORTSWIRE/ FOR SOCCER VENTURES (FSV), an organization engaged in the long term development and growth of soccer, will be hosting the Alianza de Futbol 2022 National Finals in Phoenix, Arizona.

The winners of the regional Verizon Copa Alianza and Ford Copita Alianza events will face off at the finals, simultaneously as the Allstate Sueño Alianza National Showcase, the largest tryout program for hispanic youth in the United States. More than 30 scouts from Liga MX, MLS, colleges and representatives of the Mexican Soccer Federation and U.S. Soccer will be in attendance.

The National Finals will take place from November 5 to 10 at Bell Park in Phoenix, Arizona, where the event will conclude with the traditional scarf ceremony in which the invitations from the clubs and/or teams will be given to the young hispanic residents in the United States.

It will be the second year that the Ford Copita Alianza National Finals will be held within its 5 different categories (Sub 13, Sub 15, Women Sub 16, sub 17 and Sub 19) to which the winners of every city of the tour were classified

Ford Copita Alianza was created to boost Soccer in these categories, also adding the possibility for the young players to be seen by the best scouts. 920 players, plus coaches and fans will be present at Phoenix.

As well as in Verizon Copa Alianza, the games will be played first in group stages, after that there will be direct elimination and the finals will be held on November 10.

Regarding the Ford Copita Alianza finals, FC Dallas RGV (champion at Austin) will seek to reaffirm its title at Sub 13, El Paso Lokomotiv Academy (Champion at El Paso) will try to repeat at Sub 15, SoCal Select will seek a new title at Women sub 16 and the Sub 17 and Sub 19 championships are open and up for grabs!

It will be at this time when a team trained by renowned scouts representing the Méxican Federation, coordinated by Rafaél Calderón, Director of Scouting and Coaching at For Soccer Ventures, will be directing the training of the 64 young hopefuls, of which, 16 are women. The scarf ceremony will be led by Enrique Borja, Mexican Soccer legend, serving as master of ceremony.

See you there!, Phoenix