Adventure Race Croatia – A Remarkable Race For Every Team 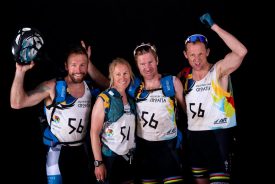 Adventure Race Croatia is one of the most popular races in the Adventure Racing World Series, and this year welcomed 48 teams, with racers from 5 continents

Adventure Race Croatia is one of the most popular races in the Adventure Racing World Series, and this year welcomed 48 teams, with racers from 5 continents, including past winners and the current World Champion team.

The race took place in the Gorski Kotar and Kvarner regions, on a 590km course, taking in the main islands of the Kvarner bay, the Istrian peninsula and the northern Croatian mainland. The island and mountain scenery of Croatia, paddling on the clear waters of the Adriatic Sea, and the Mediterranean climate are all attractions of the race, but it was no picture post-card tour! Teams experienced extreme temperatures, technically challenging terrain, course changes due to high winds on the ocean, and only 12 of the starting teams completed the full course over 5 days of intense World Series racing.

The start of the adventure was on the island Krk, at a beach side resort near the town of Baška, where teams prepared for a race with 17 stages and 14,500m of climbing. Adventure Race Croatia has shorter stages than other ARWS races, with teams changing frequently between hiking, biking and paddling. Race organisers Igor Dorotic and Ana Rumiha of Remarkable Events plan courses with lots of variety, and believe this allows teams a more enjoyable race experience, and to finish the race in better physical shape.

By the end of day one the leading teams had raced through 7 stages and 33 checkpoints, exploring Krk and paddling to the larger island of Cres. If anything the weather was too good, with a fierce spring sun beating down onto the rocky islands, where there was no shade, and racers were coping with temperatures up to 30C. Despite coming out of training through a Scandinavian winter, the World Champions, The Swedish Armed Forces Adventure Team, quickly took the lead, and went on to dominate the race.

Challenges included swimming (into a cave to get one checkpoint) and orienteering, as well as trekking, biking and sea paddling, with checkpoints located at ruins, on cliffs and beaches, the shores of small islands, and in attractive towns and villages. By the second night of the race even the lead teams has slowed their furious pace and it was on the 3rd morning of the race that the Bora wind struck and changed the course of the race, literally.

The cold, katabatic wind blew up quickly and fiercely, and made paddling difficult and dangerous for the teams. Only the Swedish Armed Forces team completed the 13km paddle from Cres to Istria, and the following teams were either forced ashore or picked up by race safety boats as the stage was cancelled. Subsequent teams used a local ferry for the crossing, and Team Buval, who were at the back of the race and on the previous paddling stage, were also rescued, taking shelter on an island.

“We were afraid of the Bora wind, but creating the race in this region had to be done this way, so we took the risk, because changing the route would not honour the terrain and nature of Kvarner in its entirety,” said Rumiha. It was a low risk, as the wind is rare this time of year, but the race was unlucky.

“We left logistics completely to our amazing volunteers,” she continued. “They transferred the whole transition area and all the bikes to the ferry port, so all the teams could continue their race. The last kayak leg into the finish was not an option anymore, so we changed the last part of the course, made new maps and printed them out. Our volunteers are beyond amazing. The collective vibe and cooperation between our 40 people makes us so proud to have them around and I can never repeat enough how this race would be impossible without them.”

Oskar Svard of the SAFAT team described the paddle. “The waves were metres high and we were crashing up and down, and couldn’t steer a course or make any progress against a head wind. It was thanks to the experience of the team that we made it through.”

The team continued racing the original course, and Svard said, “On leg 13, the longest trekking stage, we were told there was no water for 10 hours, so we had very heavy packs with 5 litres each. We stopped to sleep at the end for 45 minutes, just to be safe for the final, downhill ride to the finish, and because we knew we had a lead of some hours. It was 3 degrees when we slept in the hills, and it had been 30 degrees on the first day!

“Those first stages were so stony and we are not used to that in Sweden. I destroyed 3 pairs of shoes! We were careful of the salt water after the swims and paddles too, and cleaned ourselves carefully at the end of those stages, and, of course, we protected our Scandinavian skin from the sun!”

The team crossed the finish line back in Baška to win in a time of 77 hours 8 minutes, and Svard said afterwards; “I think it’s the most perfect race we’ve had as a team. We didn’t have to push all the time and kept to our own plan. I’ve never felt so fresh after a race, so I like this kind of competition with shorter stages!”

That may not be great news for those trying to catch them, or take their World title in Paraguay later in the year. Their nearest challengers in this race were Polish team GymCity AR, who finished over 5 hour behind them and said, “After an exciting fight in the last stages we beat Absolu Raid Occitaine (France) for second place. We have a lot of work to do to win against the best teams like SAFAT, but we will train a lot and see what we can improve for our next competition in Ecuador.”

For this race they had two time World Champion Jo Williams from New Zealand on their team, and they added, “Jo was strong, like a rock, and always smiling, and she helped us see our weaknesses and what we need to improve.”

Ryan Larkman from the The Rookies said, “We are a very casual team and were out to have the most fun, so we stopped for breakfast, coffee or lunch when we could, and had a lot of sleep. We are just everyday parents who enjoy adventure racing sometimes, and this race has to be top of our racing experiences. The whole set up is so professional and the route is designed in beautiful scenery with lots of short course options and loads of variety, so there is something for everyone. Each leg we did was tough and a real challenge, so we had the full racing experience, and we got to spend time with the amazing volunteers too.” He added with a laugh, “And at the end we were the second team over the finish line, just behind the World Champions!”

Another short course team, and one of those to travel the furthest, was the Wilderness Traverse team from Canada. They are an experienced and well-travelled team, but Chris Laughren said, “This was different to anything else we’ve done! We met Igor at the World Champs in Wyoming (the Race Director is also an experienced ARWS Referee) and he was explaining how his race had more transitions and stages to keep teams fresh, and no hike-a-bike, and we liked the sound of that.”

He added, “In North America we usually have a good chance at a podium place, but the European teams are in a different league and by day one we knew we’d just be happy to finish the course! There was one trek where we were picking a way carefully down steep and sharp rocks and other teams were running by us! We loved the experience of being on the islands, and the rope and boulder climbs in the canyon on the long trek. At one point the trail just ended and we had no idea where to go … then we saw an arrow pointing up a rock face!”

“It was great the race made sure teams could do as much of the course as possible and having come so far it was good to know they would do all they could to look after us.”

You can find out more about Adventure Race Croatia at https://arc.remarkable.events/ and see race photos and reports on their Facebook page at https://www.facebook.com/adventureracecroatia

The next race in the series is Expedition Canada, taking place from June 3-11th.