7.8 Million Impressions for Pic2Go’s Race Photos at the TTP Cambridge Half Marathon 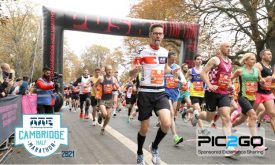 Pic2Go race photography solution has generated 7.8 Million impressions for sponsored participants’ photos, shared via the platform to social media, at the TTP Cambridge Half Marathon!

Over 6,000 participants have shared their TTP Cambridge Half Marathon race photos through the Pic2Go platform to Facebook – generating the massive reach and social engagement to the TTP-sponsored photos, boosting TTP’s race sponsorship with a most effective digital marketing aspect.

“Turning race photography into a powerful digital sponsorship tool is our goal at Pic2Go, and the activation at the TTP Cambridge Half Marathon was a great example of what can be achieved!” said Eitan Hefetz – Pic2Go CEO. “We are very proud of our Pic2Go UK partner for delivering such a great sponsored race photography activation!”

Sally Bliss, Managing Director for Pic2Go UK added, “we are delighted to be the participant photography partner of the TTP Cambridge Half Marathon this year.  It’s always such an incredible buzz to see the photos being shared live on race day.  Enabling the stories of achievement to be shared with friends and family in the moment and shared on social media is very special.”

About Pic2Go UK (operated by sussexsportphotography.com)

Pic2Go UK are the exclusive licensed partners for Pic2Go technology in the UK.  Operated by Sussex Sport Photography who specialize in capturing high quality images that tell the story of the event to become treasured memories for years to come.
For more information about Pic2Go UK visit https://pic2go.co.uk/

For your chance to join thousands of runners when the race returns on Sunday 6th March 2022 visit the TTP Cambridge Half Marathon webiste https://cambridgehalfmarathon.com/

About the sponsor TTP plc (www.ttp.com)

TTP is an independent technology company where scientists and engineers collaborate to invent, design and develop new products and technologies. Working across a wide spectrum of industries including health, telecoms, industrials and consumer, TTP creates breakthrough solutions that bring strong commercial value to clients and the benefits of technology to all.

View all Releases by Pic2Go Ltd.