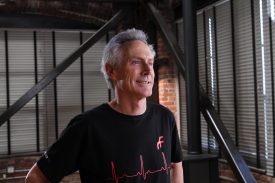 The company has made great strides to release the Frontier X2, the world’s first wearable smart heart device that allows endurance athletes like Allen to closely assess their heart strength and health. The Frontier X2 monitors the heart continuously over long periods of time, providing endurance athletes with unprecedentedly detailed data that is not only valuable in keeping tabs on overall heart health, but also in optimising training and racing.

Unlike traditional heart rate monitors that only record beats per minute, the chest-worn Frontier X2 also records the core functioning of the heart and lungs – generating a continuous ECG graph. Users can thereby monitor and correlate this ECG data with their breathing rate, heart rate, heart strain, and even their specific activity on a detailed dashboard – offering a complete report of your real-time cardiac and respiratory health.

Using cutting-edge hardware, software, and advanced patented algorithms, Fourth Frontier combines the best of cardiac science and wearable technology to afford its users access to data, metrics, and insights that wre previously only available in labs and clinics.

“The Frontier X2 is an amazing device that will help you see what’s really going on in your heart,” says Mark Allen. “Your heart is the basis for everything to do with endurance athletics. If your heart is healthy, your entire body is, and the Frontier X2 helps you keep it that way. The Frontier X2 gives you on the spot feedback about your heart, so you can see if you’re healthy, if you’re pushing too hard, if there’s anomalies. If you’re serious about your sport, you should consider the X2 because it’s the only way that you’re going to be able to keep the muscle most important to your sport healthy – your heart!”

“We are elated that Mark Allen is partnering with us to help endurance athletes monitor their hearts and train at optimum levels. Over six years of research and development have gone into the making of the Frontier X2, which has been tested and validated in various settings – ranging from high-intensity sports to care facilities. Thousands of amateur athletes who are users already benefit from the Frontier X2, and this partnership with Mark Allen could help extend these benefits to millions more,” says Sandeep Sibal, CEO and Co-Founder of Fourth Frontier.

Mark was undefeated in ten trips to the Nice International Triathlon in France, and from 1988-1990 he put together a streak of 21 consecutive race wins at all distances of triathlons from the Olympic distance all the way up to Ironman.

Over the course of his endurance racing career, Allen maintained a 90% average in top-three finishes. He was named “Triathlete of the Year” six times by Triathlete Magazine. Outside magazine tabbed him “The World’s Fittest Man” and he was also inducted into the Ironman Hall of Fame. He was voted “The Greatest Endurance Athlete of All Time” in a worldwide poll conducted by ESPN.

Post-retirement Mark has devoted his career to coaching athletes of all levels, sharing the lessons he’s learned about preparation, perseverance, and living up to your full potential with teams, companies, and organizations worldwide.

Mark understands how demanding extreme endurance sports can be on the heart, and has incorporated the Frontier X2 into both his own and his client’s training routine to ensure that he can monitor and improve their heart health along with their training performance.

Fourth Frontier is a pioneering health tech company that builds and offers products and services for monitoring and improving heart health for people across the world.

Cardiovascular disease is the leading cause of mortality across the globe. Despite its importance, affordable products and services to monitor and improve heart health from the comfort of the home or during exercise have not been available to consumers. Fourth Frontier is committed to solving this important problem.

The Frontier X2 is a revolutionary patented product that provides real-time feedback on heart health to users on the move, helping them improve said heart health and stay safe while exercising.

View all Releases by Nishant Kapoor