3,000 Runners hit the streets of Norfolk for the 9th Annual Chartway Norfolk Harbor Half Marathon 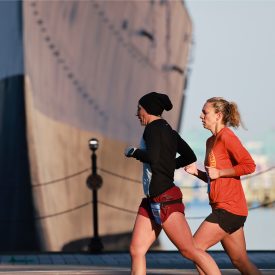 Participants from 35 states join in.

NOVEMBER 20, 2022 – NORFOLK, VIRGINIA /ENDURANCE SPORTSWIRE/ –  Over 3,000 runners made their way down the historic streets of Norfolk during the Chartway Norfolk Half Marathon presented by Bon Secours. Runners from 35 states crossed the finish line both Saturday and Sunday.

Runners began their weekend with packet pickup on Friday or Saturday at Norfolk’s Half Moone Cruise and Celebration Center grabbing their bibs, shirts and other needs for the race. Saturday was kicked off with the running of the 5K that winds through the downtown area of the city. Finishers and their supporters were treated to food and drink and live music from AudioHUM.

Sunday’s big races included the 10K and Half Marathon. Runner’s crowded Waterside drive and toed the line with spectators cheering them on. Participants weaved their way through downtown, historic Ghent, Old Dominion University before making their way back to Town Point Park for a picturesque waterfront finish overlooking the Elizabeth River. Half Marathoners and 10K finishers were treated to food and drink and live music from the energetic yacht rock band, Schooner or Later.

“This race really kicks off the holiday season. People come to get their exercise on and enjoy what Norfolk has to offer.” says co-race director, Jerry Frostick

The Kid’s Mile race on Saturday was extra special for good reason. The Starting Strides Shoe Program stretched from the Yuengling Shamrock Marathon Weekend to be a part of the Chartway Norfolk Harbor Half Marathon Weekend too. Almost 100 pairs of shoes and race entries were given to local Norfolk students from Jacox Elementary, Lindenwood Elementary, Tidewater Park Elementary and Richard Bowling Elementary to encourage health and fitness in everyday life. Many of these kids participated in Saturday’s race.

J&A Racing is a nationally recognized race management company based in Virginia Beach, Virginia. With a portfolio of seven events, J&A Racing’s mission is to promote and support healthy lifestyles and the sport of running through all stages of life. Since 2003 when J&A Racing owners, Amy and Jerry Frostick, took over the Shamrock Sportsfest, the Yuengling Shamrock Marathon Weekend has become one of the most popular running events in the country growing from 3,000 participants to a record 30,000 in 2015. Additionally, J&A Racing organizes the Old Point National Bank Wicked 10K; the Big Blue 5K; the BayPort Credit Union Surf-N-Santa 5 Miler; the BayPort Foundation Crawlin’ Crab Half Marathon & 5K; the Chartway Norfolk Harbor Half Marathon Weekend; and the ADP Corporate 5K. For more information on J&A Racing’s events, visit jandaracing.com.

View all Releases by J&A Racing