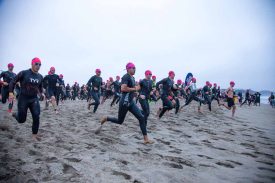 Event Registration Still Accepting Entries Before it Sells Out

Malibu, CA /ENDURANCE SPORTSWIRE/ – 2XU Malibu Triathlon announced today it is still accepting registration for 2022 until it sells out. The iconic event will take place across the weekend of September 17-18, with the Olympic distance event on Saturday along with the Super League Triathlon Championship Race, and the Classic distance on Sunday.

Each of the event distances feature the beautiful backdrop of the Santa Monica mountains and the Pacific Ocean. The Olympic distance is a 1.5k Ocean swim, a 40k out and back bike along Pacific Coast Highway and a 10k run along the sands of Zuma Beach. The Classic distance features a ½ mile swim, 17 mile bike and 4 mile run. Participants can choose to compete individually or as part of a relay team.

The race is a local favorite that attracts top triathletes across California and Hollywood celebrities raising money for Childrens’ Hospital Los Angeles. This year the event is seeing a record setting amount of corporate teams return and a 100 percent increase from 2021. As companies recover from Covid-19 restrictions, they are encouraging individual and corporate wellness by participating in outdoor team building activities . A few of the teams competing and fundraising include: Bank of America, Amazon Studios, Google, Disney, Paramount, CHLA, Warner Brothers, and Medtronic.

The 2XU Malibu Triathlon has partnered with pediatric cancer research at Children’s Hospital Los Angeles for 16 years and has raised more than $16 million to date. The race director and owners encourage everyone to come out and have fun and raise funds for the worthy cause by visiting https://bit.ly/Donate_MalibuCHLA.

The 2XU Malibu Triathlon expects to welcome more than 5,000 participants and 10,000 spectators during the weekend event.

For event details and information on the Malibu Triathlon, visit https://malibutri.com/