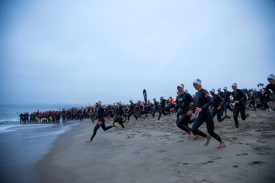 /ENDURANCE SPORTSWIRE/ – 2XU Malibu Triathlon is delighted to announce its 2022 race weekend will be held on September 17-18.

Entries will be available from March 1, and are sure to be in demand following 2021’s sell-out event which saw more than 5,000 people take part on the shores of Zuma Beach.

Athletes can pre-register their interest now and save $10 when registration opens by visiting malibutri.com

The Age Group races will feature the event’s prestigious Classic and Olympic distances. The Classic distance is a 0.5 mile swim, 17 mile bike and 4 mile run, while the Olympic distance consists of a 1.5km swim, 40km and 10km run.

2XU Malibu Triathlon 2022 – which sees the event celebrate it’s 35th birthday – will also include the return of the Corporate Challenge and Entertainment Industry Challenge and will continue to add to the $16m already raised for pediatric cancer research at Children’s Hospital Los Angeles (CHLA).

The 2021 event was the first under the ownership of Super League Triathlon (SLT), and saw a record $849,288 raised for CHLA. Hollywood celebrities such as Chace Crawford, Dylan Efron, Max Greenfield, Alexi Pappas, Rich Roll and Mary Cain lent their support and raised money for this special cause. Sandra Endo finished first in the celebrity female division with a time of 01:47:25 and Dylan Efron came in first in the celebrity male division with a time of 01:36:35.

The 2022 event will also allow Age Groupers the opportunity to watch Olympic and World champions in action as part of the Super League Triathlon Championship Series.

To pre-register and save $10 on an entry fee, and for more information on the Malibu Triathlon, visit malibutri.com

The Malibu Triathlon Presented by Bank of America takes place at Zuma Beach in Malibu, California. Triathletes from around the world, corporate teams, professional athletes, Hollywood celebrities, and challenged athletes gather to race on one of the most beautiful courses in the sport of triathlon all while supporting Children’s Hospital Los Angeles with $16m already raised. A number of celebrities have brought their star-power to the cause and helped reach record-setting fundraising goals. Among them: Jennifer Lopez, Tom Cruise, Jennifer Garner, Matthew McConaughey, Mario Lopez, Jeremy Piven, Will Ferrell, Rainn Wilson, Ed Helms, Zac Efron, and Ellie Kemper to name just a handful. For more information visit malibutri.com

Super League Triathlon (SLT) is the world’s premier swim-bike-run Series, pitching the very best athletes against each other in quick and exciting race formats in fantastic destinations across the globe.

The Championship Series takes place from August-November with the best triathletes on the planet doing battle over game-changing formats which are redefining the sport for a modern audience.

Super League’s Arena Games Triathlon is a dynamic new esports format which blends in real life and virtual racing to deliver an immersive viewing experience via a unique partnership with Zwift. It will crown official triathlon esports World Champions thanks to its groundbreaking partnership with World Triathlon.

Founded in Australia in 2005, 2XU is a technical sports apparel company and a platform to help people chase their finish lines. The global leader in sports compression, 2XU compression is designed and tested in consultation with elite athletes, sports scientists and industry experts, and is backed by independent, scientific research by leading research teams. Sold globally, 2XU is the performance apparel brand of choice across endurance sports including triathlon, run and cycle, as well as the compression brand of choice for some of the world’s best athletes and teams at all levels including basketball, football, soccer and baseball. 2XU helps athletes of all abilities prepare, perform, recover and repeat as they work toward their finish lines. With a heritage in endurance sports, 2XU is on a mission to help create a fitter and healthier world. For more information, visit www.2XU.com or follow 2XU on Facebook or Instagram