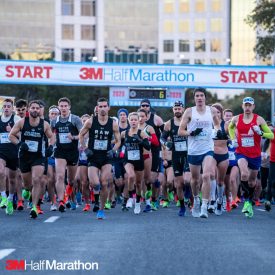 Thousands will chase their 13.1-mile PR on one of the country’s fastest half marathon courses

AUSTIN, Texas, January 20, 2022 /ENDURANCE SPORTSWIRE/ – High Five Events, one of the largest privately owned event production companies in the United States, is putting the final touches on the 3M Half Marathon presented by Under Armour. More than 6500 participants have registered, with 48 states and 10 countries represented. Thousands of runners will chase their half marathon PR on Austin’s roads. Additionally, several elites will run in training for the upcoming Ascension Seton Austin Marathon on February 20th. The 28th annual 3M Half Marathon will take place on January 23, 2022.

“We’re excited to be able to return to running after the cancellation of 2021 3M Half Marathon,” said Jack Murray, co-owner of High Five Events. “A lot of happy runners will be crossing the finish line this year and many will be setting personal bests on this Downhill to Downtown course.”

Participants will receive their 28th anniversary Under Armour participant shirt and swag bag filled with useful 3M products at the Expo & Packet Pick Up. The race starts near The Domain in north Austin at 7:30 AM and will implement wave starts to accommodate social distancing. Thousands will run the predominantly downhill course in search of their PR, cruising through beautiful Shoal Creek Blvd., historic Hyde Park neighborhood, and the world-renowned University of Texas at Austin before finishing near the Texas State Capitol in downtown Austin. The 3M Half Marathon’s finish line will celebrate finishers and their efforts. They’ll receive their customizable spinning finisher medal, post-race hydration, and snack bag.

The 3M Half Marathon boasts one of the fastest 13.1-mile courses in the country. Runners enjoy a point-to-point course with mostly downhill running that showcases some of Austin’s finest locations. Starting in north Austin and finishing near the Texas State Capitol, runners will appreciate a 306’ net elevation drop. Registration is currently open.

About High Five Events: Beginning with the launch of a single triathlon in 2003, High Five Events has grown to become one of the largest privately owned event production companies in the United States. High Five Events is a community-centric company based in Austin, Texas. Their staff has more than 100 years’ combined experience organizing large events across different venue types in a variety of locations.