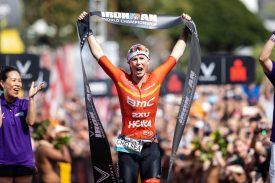 Chelsea Sodaro grew up in Davis, California where she spent time cycling, swimming and playing competitive soccer. Later, she developed a passion for running and went on to become a four-time All-American racing competitively in cross-country and track at UC Berkley. When injuries derailed her efforts to make the 2016 Olympic team she turned her attention to multisport and completed her first triathlon in the spring of 2017. Later that season she achieved her first ITU World Cup podium. This was followed by winning her first ITU World Cup in 2018. She then successfully transitioned to long-course racing placing in the top 5 in all 8 IRONMAN 70.3 events she raced in 2018 and 2019 including five 1st place positions and 4th at the IRONMAN 70.3 World Championships in Nice, France.

Chelsea gave birth to her daughter, Skye, in 2021 adding the need to balance the challenges of raising a family to the training rigors of a professional triathlete. Still, Chelsea continued to perform at a high level when she returned to racing just 4 months after giving birth to take 6th place at IM 70.3 Boulder in August 2021. In June 2022 Chelsea debuted at the IRONMAN distance placing 2nd at the IRONMAN European Championship in Hamburg, Germany in a time of 8:36:41 (the second fastest debut time in history), but her biggest racing achievement was yet to come.

Chelsea shocked the long distance racing world at the IRONMAN World Championships in Kona, HI by taking 1st place among the professional women in a time of 8:33:46. The win made her the first female to take the IRONMAN world title in her first race since Chrissie Wellington in 2007, she was also the first American woman to win it since 1996… AND the second mom ever to win! “No-one was picking me to do much of anything here,” Chelsea Sodaro said after the win. “I thought I had a really solid debut in Hamburg, the second fastest debut ever, and I think I maybe got a little chip on my shoulder that my name wasn’t even in the conversation here,” she added.

Attendees of RACE-MANIA will have multiple opportunities to connect with Chelsea and hear her speak. She will be available at 11:00am for a “Meet & Greet” at the Max Performance booth on the RACE-MANIA expo floor and then participate in a keynote Q&A moderated by fellow IRONMAN World Champion and USA Triathlon Hall of Fame inductee, KAREN SMYERS, at 1:00pm. A limited number of attendees will also have the opportunity to sign up for a “VIP Pass” which will include participation in a shakeout run with Chelsea the morning of RACE-MANIA, priority seating for the keynote Q&A and a goodie bag.

RACE-MANIA offers endurance athletes an energy-packed day that features educational presentations, hands on-clinics and workshops, competitive events, a vendor expo and more. Adding to the excitement on the day, RaceQuest Travel has contributed two Grand Prize Giveaways that eligible attendees can win including (1) 2024 Challenge Roth 7-Night Classic Race Week Tour with one race entry valued at $3,995; and (2) 2023 IRONMAN World Championship 7-Night Tour in Kona, HI for the winner and a guest valued at $5,995. Complete details can be found here: http://race-mania.com/boston/overview/

View all Releases by SunMulti