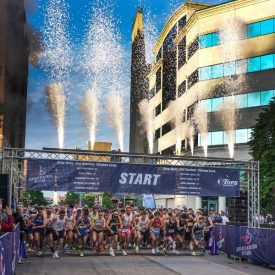 The Buffalo Marathon honored the victims lost in the May 14, 2022 shooting

Lucas McAneney was the 2022 Winner of the Buffalo Marathon.

Lucas pushed a stroller with his two-year-old son Sutton for a final time of 2:33:32. Lucas nearly broke the world record of 2:31.21 set in 2016 by Calum Neff in the Toronto Waterfront Marathon.

Jenner Selig and C.C. Tellez were the top two finishers in the Buffalo Marathon 5k, making it the first time two females placed first and second overall in the race.

About the Buffalo-Erie Marathon Association Inc.

A 501(c)(3) organization, the Buffalo-Erie Marathon Association Inc. (buffalomarathon.org) organizes and presents the annual Memorial Day Weekend, which includes a 5k, Diaper Dash, Kids Mini Marathon, Ruffalo Stampede dog race, along with full and half marathons. The companion Kaleida Heart to Heart Relay benefits the cardiac care units at Buffalo General Hospital and Gates Vascular Institute. The events combined include 8,000+ runners from more than 10 countries and 45 states. The weekend is supported by more than 1,500 volunteers from 40+ not-for-profit organizations who, over the event’s 20 years, have received grants totaling more than $664,000. The event has an estimated annual economic impact of more than $1,500,000. 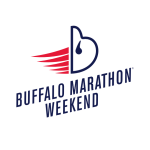 View all Releases by Eventgrow