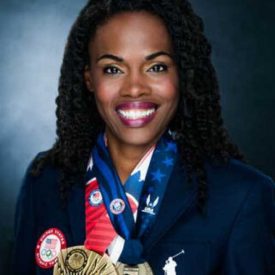 NEW YORK, September 20, 2022 /ENDURANCE SPORTSWIRE/ – AKTIV Against Cancer, the organization co-founded by legendary runner Grete Waitz and Helle Aanesen, today announced it will honor adidas and Olympic Champion Chaunté Lowe for outstanding contributions to the field of Exercise Oncology at their eighth annual awards luncheon. The reception will be held November 3 at the historic New York Athletic Club.

Over more than 10 years of collaboration, adidas has accounted for more than $10M in donations toward AKTIV Against Cancer’s groundbreaking exercise oncology research and programs. United by the power of sport, the two organizations have worked together to help those fighting cancer improve their quality of life through physical activity.

“adidas has been an incredible supporter of AKTIV Against Cancer since our inception and has always embodied our mission to the highest degree,” said AKTIV Against Cancer CEO Helle Aanesen. “We simply couldn’t have done what we have done without adidas. There is no one better to honor than Grete’s longtime sponsor and our biggest believer, adidas.”

AKTIV Against Cancer’s partnership with adidas was born out of adidas’ relationship with the late Grete, who passed away in 2011. Grete had a storied history with adidas during her ground-breaking long-distance running career, having worn and promoted its apparel and footwear for more than 30 years.

“At adidas, we believe sport has the power to change lives, and few athletes have personified that motto as thoroughly as Grete Waitz,” said Adrian Leek, Sportswear & Footwear Vice President at adidas. “Our partnership with AKTIV Against Cancer represents our gratitude for everything Grete accomplished during her remarkable life, and we are proud to supported such a great cause for more than a decade.”

Additionally, AKTIV Against Cancer will honor four-time Olympian, 2008 Olympic bronze medalist and former high jump world champion Chaunté Lowe with the Gabrielle Grunewald Inspiration Award for her courage and her dedication to expanding resources and support for others fighting breast cancer. Lowe is a Global Ambassador for the American Cancer Society and a spokesperson for a new partnership between pharmaceutical company Eli Lilly and patient advocacy group Susan G. Komen.

Mary Wittenberg, Global CEO of Virgin Sport, received the inaugural award in 2015 and running legend Meb Keflezighi received it in 2016. In 2017, AKTIV Against Cancer honored The Rudin Family for their long-standing commitment to the TCS New York City Marathon and the late professional runner Gabriele Grunewald for her commitment to continue running through her cancer and inspiring many to be physically active through treatments.

For more information about AKTIV Against Cancer please visit www.aktivagainstcancer.org/award

ABOUT AKTIV AGAINST CANCER

AKTIV Against Cancer works to ensure that physical activity will become part of cancer treatment. We support cutting edge research on the benefits of exercise for the prevention and treatment of cancer, as well as the creation of fitness programs and facilities in cancer treatment centers. AKTIV Against Cancer was co-founded by 9-time NYC Marathon Champion and Norwegian running superstar Grete Waitz and current Executive Director Helle Aanesen in Norway in 2007. After among other having opened sixteen (16) physical activity centers in cancer hospitals throughout Norway, AKTIV Against Cancer established its official presence in the United States in 2014. AKTIV Against Cancer has committed to funding $3.3 million towards cutting edge exercise oncology research at Memorial Sloan Kettering Cancer Center. The foundation also contribute to building up cancer treatment in Ethiopia by educating oncologists and cancer nurses and making sure their competence will be present at all University hospitals in the country.

Running brand On creates shoe made from carbon emissions