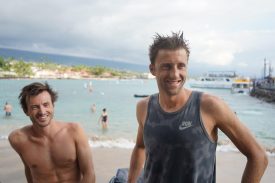 Pro Rudy von Berg, 29, and brother Maximilien, 35, will make their first appearance at Ironman Hawaii, Kona. It is also the first time in Ironman History that a Pro will be on the starting line with a brother racing as an age grouper. The Tinleys, in the 1980’s, were both Pros.

Rudy and Maximilien are the sons of Rodolphe von Berg, a former Pro in the mid 1980’s and 8x LD Triathlon World Champion.

In 2022, Rudy, representing the USA, placed 3rd at IM 70.3 Oceanside and Chattanooga before winning an Ironman on his first attempt, in Nice, France. He, then, changed coach, from Luc Van Lierde to Mikal Iden and caught a nasty stomach bacteria while travelling. He lost 10 lbs, and lots of watts which showed in an average Collins Cup participation (10th/18), and a dismal PTO US Open (20th).

Maximilien, representing France, has raced only once in 2022 since getting his slot at Ironman Nice 2021. It was at IM 70.3 Rwanda, in August, where he placed 3rd overall, winning his 35-39 AG. He is a World Bank Consultant specializing in African countries and, as such, in his last assignment in Bujumbura, Burundi, could only train indoor on the bike and could not swim in the lake infested with crocodiles. It’s only upon his return to Europe in July that he could start to train seriously in all 3 sports.

Both von Bergs are arriving in Kona in complete unknown territory in terms of their fitness level and consequently have no high expectations except for Rudy to try to have a decent race in the Top 15, and for Maximilien to race around 9hr.

Their main goal is to participate together in the legendary Hawaii event and hopefully see and encourage each other at times during the race. They will be supported by the whole family.

“You Are An IRONMAN”: How Mike Reilly Became The Voice Of IRONMAN