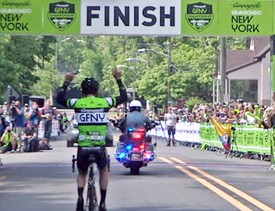 NEW YORK CITY, October 28, 2015- Oscar Tovar from Colombia, the winner of the 2015 Campagnolo Gran Fondo New York and first annual GFNY Championship, tested positive for synthetic testosterone use during the in-competition doping controls administered by US Anti-Doping Agency (USADA) at the race. Tovar has been banned from any competition under World Anti-Doping Agency (WADA) rules for two years and by GFNY for lifetime at any GFNY World event.

“We are of course upset and hurt that a doper taints the reputation of our race and had us celebrate him on the day”, says GFNY CEO Uli Fluhme. “However, it’s without a doubt more important for us to do what we can to make our race fair, of which doping controls are an integral part. Simply looking away and not testing the athletes is the worst decision that a race director can make because it forces everyone to take drugs to try to level the playing field.”

The newly declared winner of the 2015 Campagnolo Gran Fondo New York is Raul Montana from Colombia. The runner-up is Timo Krieger from Germany followed by NYC local Mike Margarite in third. Perhaps without Oscar Tovar in the field, the men’s race would have unfolded differently and yielded a different overall podium [GFNY 2015 race video].

Another athlete who tested positive for a banned substance is Yamile Lugo of Colombia, who finished in 3rd place overall in the women’s field. Just like Tovar, the values detected in Lugo’s sample were consistent with the administration of a steroid of exogenous origin. Those values certainly could have been caused by the athlete’s use of testosterone, but it could have also been caused by her use of another anabolic agent such as DHEA.

The USADA resolution came only now due to a lengthy process resulting from both riders disputing the positive samples.

Fluhme adds: “While we cannot turn back time to celebrate the true overall podium winners, we make sure that at least the right winners receive the prizes they were supposed to earn. And we continue our efforts to provide our athletes fair racing conditions through in- and out of competition doping controls, despite it being a substantial cost for GFNY. The ultimate goal is not to catch cheaters but to deter them from racing at all.”

GFNY established doping controls in 2012 and is the first event open to amateurs that also institutes out of competition tests. In 2012, David Anthony from NYC and Gabriele Guarini from Prato, Italy tested positive for EPO at GFNY after winning their respective age groups. All samples in 2013 and 2014 were negative.

In addition to a lifetime ban for dopers at GFNY races, the race’s rules also state that a rider who tests positive at GFNY will have to reimburse the cost of the doping test. Furthermore, such rider has to reimburse GFNY for any damages to its reputation that are a consequence of the positive doping control. If the rider is part of a team participating at GFNY, the team can be held liable for this damage [GFNY rules].

A rider who is currently banned by WADA from competition may not participate in any GFNY event. After the ban, he/she is allowed to participate but has to start at the back of the field, will not be timed and will not be in the results. This allows for social reintegration despite a lifelong ban from competing.

Checking for Motors in Bikes

At this year’s race, GFNY also randomly checked bikes for motors. Current technology allows to invisibly integrate inaudible motors into the frame that produce up to 250 Watts for 30 minutes which increases a top rider’s output by more than 50%. For the 2016 race, GFNY plans to further extend the controls.

Main Focus Remains on Providing a Great Experience for All Riders

“Competitive sport at the top is important to us and has its place, which is why we take it seriously,” adds GFNY President Lidia Fluhme. “That said, our main focus remains on providing a superior experience for all Campagnolo GFNY participants, especially those for whom it is a lifetime goal to do their best on a challenging course. A race for elite riders requires police support with just a 15 minute rolling closure. At GFNY, however, we ensure hours of closures and right of way for anyone who takes on the challenge.”

GFNY organizes free group rides from December to race day in May open to all registered riders to help them get ready for the big day. The riders are led in several groups by GFNY’s ambassador team “Gruppo Sportivo” which consists of eight avid and experienced cyclists from all walks of life. GFNY’s sponsors De Rosa, Campagnolo, Limar, San Marco and Biemme equip the team with high end road bikes and gear. The Gruppo Sportivo members lead up to 200 riders per group ride on training rides along the GFNY course. In five years, Gruppo Sportivo has helped many new cyclists to achieve their goal of completing the Gran Fondo. And quite a few have gone on to become licensed racers.

“I love watching the elite runners at NYC Marathon floating along seemingly effortlessly,” adds Lidia Fluhme. “But the race wouldn’t be the same without the thousands of regular people like us who finish the race while managing careers, family and social obligations while still keeping sport a part of our daily lives. And that’s exactly the spirit of GFNY.”

The 6th annual Campagnolo Gran Fondo New York on May 15, 2016 will be the second annual GFNY Championship. The race features the world’s most international peloton with riders from over 70 countries. Athletes take on a challenging 100-mile route from NYC to Bear Mountain and back to compete against each other, the clock and themselves in a personal endurance challenge.

GFNY WORLD now features events in Italy, Germany, Mexico City, Indonesia, Cozumel, Argentina, Colombia and at Mont Ventoux/France. Riders there have a chance to qualify for the elite racer corral at the GFNY Championship in NYC by placing in the top 10% of their age group.