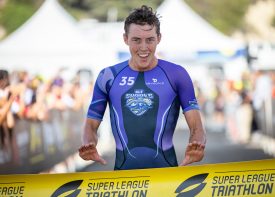 /ENDURANCE SPORTSWIRE/ – Hayden Wilde insists he is taking nothing for granted despite knowing he can put one hand on the Super League Triathlon Championship Series trophy with another strong showing in SLT’s French debut in Toulouse on Sunday, October 2 (13:00 local time).

The New Zealander has a commanding 11 point advantage at the top of the Overall Leaderboard after taking victory in the third round of the Series in Malibu in a race that saw his close rival Matt Hauser suffer a disastrous crash and early elimination.

Wilde is now a heavy favoruite for the Series title, but in the unpredictable world of Super League racing is also wary of suffering the same fate as Hauser.

Wilde said: “Despite winning I was super disappointed with the first few swims in Malibu. Coming from New Zealand I am really confident in the open water and I had a few good starts but got myself into trouble and missed the waves every time which put me on the back foot. I got the win and I am 11 points clear now but in Toulouse the same thing could happen to me as it did to Matt and I could be out.”

Hauser, meanwhile, has vowed to fight on. He said: “I have been licking the wounds. It’s just a few scrapes and bruises, but mentally it’s a little bit damaging. It has hurt my chances to win it, but I will fight tooth and nail until the end. It’s an emotional rollercoaster. You are on the road, living with everyone, living and breathing triathlon. We call it the travelling circus, but it is. Credit to Hayden. He was always going to be the one to beat leading into this.”

Things remain tense in the women’s field. Taylor Spivey’s victory in her home race in Malibu has given her a one point lead over Georgia Taylor-Brown, who also suffered a crash in California.

That leaves it all to play for as Super League lands in France for the first time for an event right in the heart of the cultural centre of Toulouse. The race will be over the Triple Mix format, meaning three rounds of swim-bike-run with the order shuffled each time.

Super League Triathlon’s 2022 Championship Series has already had rounds in London, Munich and Malibu. The Grand Finale will take place in NEOM on Saturday, October 29.

For information on how to watch Super League Triathlon in your region please visit our website.