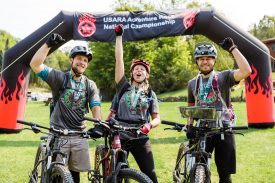 “The Adventure Racing World Series is a long-established series known for putting on amazing races in amazing places. For that reason, we’re really excited to announce that starting next year, USARA is going to be partnering with the ARWS to organize a regional series of races leading up to the 2023 Adventure Racing World Championship in South Africa,” USARA Executive Director Michael Garrison said.

“The main purpose of USARA is to take care of and strengthen the sport of adventure racing in the United States. That involves a lot of pieces – everything from increasing awareness of the sport, making it easier to get into the sport, and ultimately to make sure that as the years go on, the sport continues to flourish. We think this partnership helps us achieve all those goals.”

Event organizers set a unique course to test athletes over 125 to 250-kilometer courses of non-stop, day and night, adventure racing in the disciplines of trekking, mountain biking, kayaking, and navigation. Participating teams earn points towards their ARWS regional ranking and their ARWS global ranking, and regional winners each year receive a free entry to the next ARWS World Championship, which takes place annually in September or October.

Now a 501(c)3 non-profit organization, the United States Adventure Racing Association has been the primary national governing body for the sport of adventure racing since its inception in 1998. USARA supports race organizers and promoters in developing safe, challenging, and fun events for adventurers at all levels of the sport. Since its founding, USARA has helped to organize more than 2,500 national events across the U.S.A. It annually organizes the USARA National Championship, a 30-hour race run annually since 1999, and USARA National Points Series, which provide a venue for determining the top teams in the United States. www.USARA.com

About the Adventure Racing World Series

The Adventure Racing World Series Qualifier Circuit unites in competition the world’s best endurance athletes at the premier expedition length adventure races around the globe. The top team at each International Qualifier gains a coveted position on the start line of the annual pinnacle of the sport, the AR World Championship (ARWC). Each International Qualifier Round in the AR World Series sets a unique expedition length course to test mixed teams of four athletes over a 500+km course and 3-7 days of non-stop racing in the disciplines of trekking, mountain biking, kayaking, navigation and more. The ARWS also operates shorter, more accessible, regional series and championships on every continent, and an international ranking system for participating teams. www.arworldseries.com